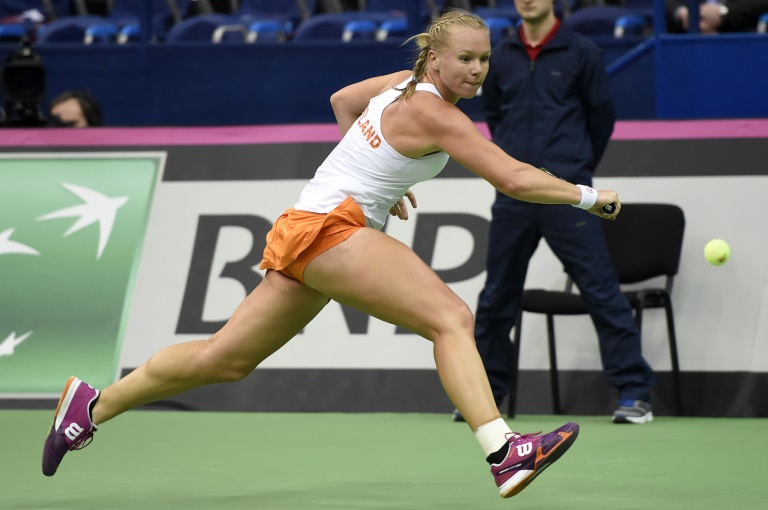 Russia and Italy, who have won eight of the last 12 Fed Cup titles, crashed out of this year’s tournament Sunday as defending champions Czech Republic survived to set-up a semi-final duel with Switzerland.

But Switzerland, who have yet to win the Fed Cup, made the semi-finals with a thrilling 3-2 win over Germany in Leipzig thanks to teenager Belinda Bencic and Martina Hingis clinching the decisive doubles.

While the Netherlands and 2003 champions France meet in one semi-final in April, the Swiss will tackle the Czechs, who edged out Romania 3-2, in the other.

The Dutch, without a single player in the top 100, made the semi-finals for the first time since 1997 after Kiki Bertens defeated two-time Grand Slam winner Svetlana Kuznetsova 6-1, 6-4.

Kuznetsova, the world 17, had lost a four-hour marathon against Richel Hogenkamp on Saturday in the longest singles match ever played at a Fed Cup.

The 24-year-old Bertens, ranked at 106, took her Fed Cup singles record to 13 wins and one loss after the Dutch, 2-0 up overnight, claimed a famous win against a Russian team who had world number six Maria Sharapova warming the bench all weekend.

“We are now among the last four countries in the Fed Cup, so itâ€™s just unbelievable,” said Bertens.

Russia captain Anastasia Myskina said she wasn’t tempted to risk Sharapova, who won both singles rubbers in the country’s 2015 final loss to the Czech Republic.

“No, she had a problem with her left arm and that wasn’t good. We decided on Thursday that she wouldn’t play,” said Myskina.

In Leipzig, 18-year-old Bencic won her third point of the weekend when she teamed up with 35-year-old Hingis to beat Germany’s Andrea Petkovic and Anna-Lena Groenefeld 6-3, 6-2 in the deciding doubles.

The Swiss will be playing in their first semi-final since 1998.

“I was cheering them on for the first four matches and then I had to go out there,” said a delighted Hingis who returned to the Fed Cup last year for the first time since 1998 in an attempt to play in the Rio Olympics.

“She did all the great volleys and all the doubles stuff. I was just happy I could play with her,” said Bencic, the world number 11 in singles.

The Czech Republic, meanwhile, recent champions in 2011, 2012, 2014 and 2015, were taken to a deciding doubles in Cluj by Romania before Karolina Pliskova and Barbora Strycova saw off Andreea Mitu and Raluca Olaru 6-2, 6-3.

Simona Halep put Romania 2-1 up earlier Sunday after battling past two-time Wimbledon champion Petra Kvitova 6-4, 3-6, 6-3 before the impressive Pliskova levelled the tie with a 6-4, 4-6, 6-3 win over Monica Niculescu.

In Marseille, Caroline Garcia defeated Camila Giorgi 6-3, 6-4 to put France into the semi-finals for the second year running.

Earlier, Kristina Mladenovic saw off Sara Errani 7-6 (7/4), 6-1 to put the French 2-1 ahead after the two nations had split the opening singles on Saturday.