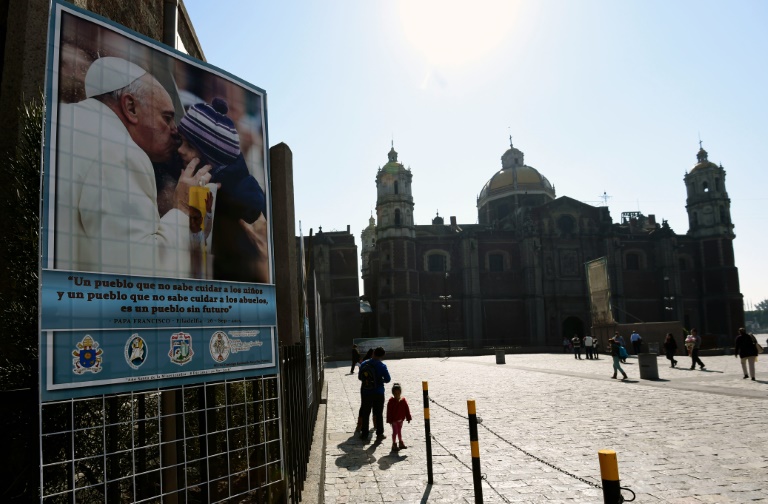 Worshipers will line the roadside holding up their mobile telephones to light the way for Pope Francis when he arrives on his visit to Mexico next week, organizers said Sunday.

The 79-year-old pontiff himself expressed “great happiness” at his looming visit, during which he will tour a major Catholic shrine in Mexico City and meet victims of violence and poverty.

Thousands of well-wishers are expected to come out to welcome the Argentine pontiff when he lands in Mexico City late Friday. They want to make the longest ever human light chain on record.

They plan to line the 19-kilometer route from the airport to the Vatican’s diplomatic mission in the capital as the pontiff passes through in his “Popemobile.”

“We want to receive the Holy Father with a special wall, what we call a wall of light and prayer,” said Roberto Delgado, a member of the organizing committee for the visit.

“We hope that with mobile phones, which are something that most people possess, we can make this light along the route the Holy Father will take,” he told a news conference.

Organizers played a video greeting from the pope himself.

“There is not long to go before my trip to Mexico and I am very happy. I feel great happiness. I have always had a special place in my prayers for all Mexicans,” he said.

– ‘Missionary of compassion and peace’ –

The pope said he would fulfill one of his “greatest desires” by visiting the shrine of Our Lady of Guadalupe in Mexico City.

Organizers called on the faithful to bring rosary beads and pray for Francis as he passes along. They suggested bringing small electrical torches but no candles for safety reasons.

Delgado said they were aiming “to set a record by forming a human chain of light of 19 kilometers (12 miles),” said Delgado.

“If people fill both lanes, then we are talking about practically 38 kilometers… That has never been done before in any country.”

The pope’s visit will run February 12-16 and is scheduled to take in several Mexican states crippled by violence and poverty.

“I wish to come as a missionary of compassion and peace,” he said in the video.

His visit will include a mass in the city of Juarez, near the US border, plagued by violence and drug trafficking.

He will meet with indigenous peoples, prisoners and the families of victims of violence.

“I want to be as close to you as possible, but especially to those who suffer, to embrace them and tell them that Jesus loves them very much,” the pope said.

On the way to Mexico, the pope will stop over in Cuba for a historic meeting with the head of the Russian Orthodox Church.