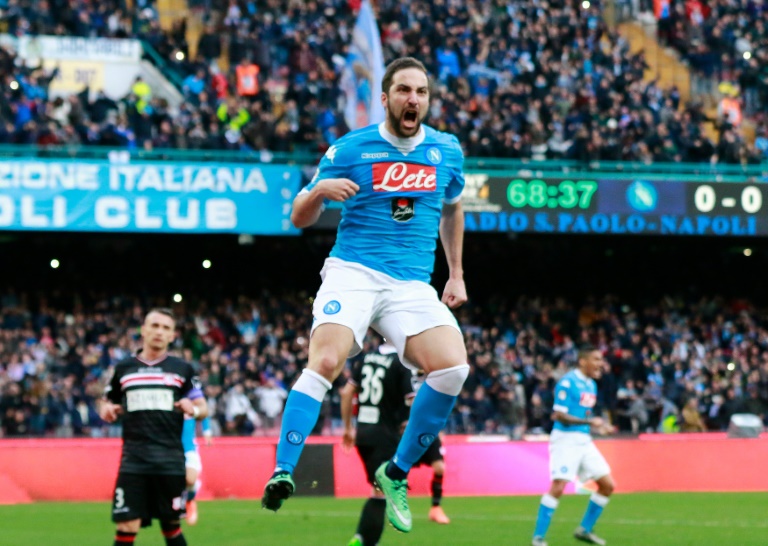 Gonzalo Higuain hit his 24th goal in as many Serie A games as triumphant Napoli and Juventus moved closer towards a scudetto duel after slip-ups by title rivals Inter Milan and Fiorentina.

Higuain and Napoli have been transformed since Maurizio Sarri took over from Rafael Benitez last summer but it took a second-half penalty for the Argentinian to keep Napoli top of the pile in a cagey 1-0 win over 10-man Carpi.

Napoli’s 17th win maintained their two-point cushion on champions Juventus, who saw Juan Cuadrado break the deadlock on 73 minutes and Paulo Dybala score at the death to wrap up a patchy 2-0 win away to league new boys Frosinone.

After Fiorentina saw their title hopes dented in a 1-1 draw at Bologna on Saturday, Inter had the chance to replace La Viola in third place and maintain their title charge with a win away to basement side Verona.

But Roberto Mancini’s men maintained their poor form in front of the opposition net before settling for a 3-3 draw.

It left Fiorentina third at 10 points behind Napoli and Inter in fourth at 11 off the pace and probably now requiring a miracle to realistically challenge for a first title since their treble-winning season of 2010.

Neither are likely to welcome Roma’s return to the fray with a generous 2-1 win at home to Sampdoria thanks to Diego Perotti’s second-half winner, his first since moving from Genoa two weeks ago, and Wojciech Szczesny’s late heroics for the hosts.

It left Roma fifth at 12 points adrift of Napoli but now just one behind Inter.

Napoli are bidding to win their first title in 26 years and will travel to Juventus next weekend looking to hand the champions defeat for a second time this season.

The feat would see Napoli pull five points clear and send a clear signal that the Azzurri, over two decades on from Diego Maradona’s heyday at the club, have their eye firmly on winning a first scudetto without the Argentina legend’s help.

Higuain and Sarri both played down the importance of the fixture, the Argentine telling Mediaset: “It’s not the most important game of the year, it’s a game like all the others.”

Sarri said: “It’s pointless to think this game will be decisive, there are so many games left and anything can happen.

“We should be happy that Juve consider us their biggest rivals but we’ll go there to play our game and honour our fans.”

But Napoli’s plans to upset the champions appeared to start immediately afterwards when Sarri cancelled his post-match press conference.

Napoli fans had flocked to the San Paolo stadium after answering calls by a supporters’ group to hold up masks of Kalidou Koulibaly after the club’s Senegal defender was the victim of monkey chants during a 2-0 win at Lazio in midweek.

It was an impressive sight and had Koulibaly suitably impressed: “It was unforgettable.

“Thanks to all the fans who, thanks to this memorable initiative, made the San Paolo an even more special place to be.”

But Napoli failed to find the net until Higuain stepped up to beat Vid Belec from the spot after Koulibaly had been hauled to the turf by Fabio Daprela.

With 14 games remaining the Argentine is chasing Gunnar Nordahl’s 1950 record of 35 Serie A goals in a single, 20-team season.

Dybala wrapped up the points at the death for Massimiliano Allegri’s men when he swept Alvaro Morata’s unselfish lay-off past Nicola Leali in the first minute of added-on time.

With 13 league goals the Argentinian is now second in the race for the ‘Capocannoniere’ (top scorer) prize, 11 behind Higuain and one ahead of Eder (Inter) and Carlos Bacca (AC Milan).

After last week’s scrappy 1-0 home win over Genoa, the win left Allegri looking forward, albeit cautiously, to next week’s clash.

“These kinds of games are difficult and nobody gives you the win on a plate,” said Allegri.

“The lads did well and now we have a week to prepare for the Napoli game, but after that we still have another 13 matches. The championship is far from over.”