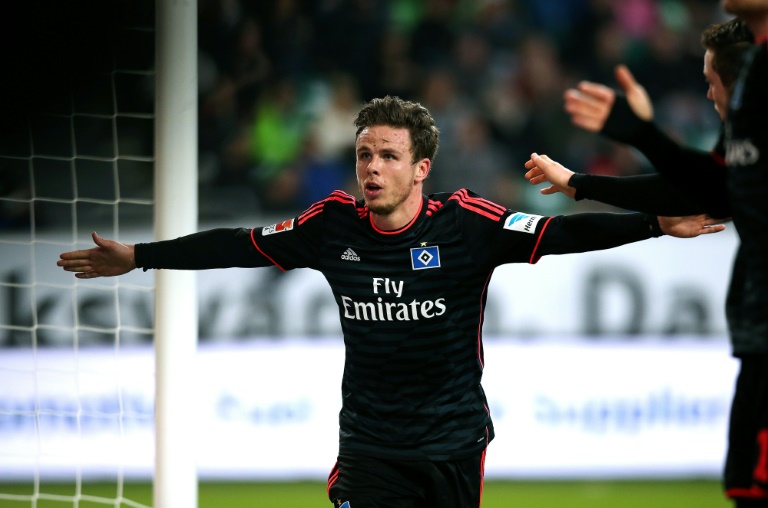 Hamburg broke their run of three league defeats with a 1-1 draw at home to Cologne on Sunday in the Bundesliga on a weekend of stalemates for Germany’s top sides.

Despite the point Hamburg drop to 12th while Cologne are ninth.

Second-from-bottom Hoffenheim badly need some points when they later host fellow strugglers Darmstadt, who are just three points from the relegation places.

The Spain midfielder saw red after earning two second-half bookings in quick succession at the BayArena to cap a turbulent week for the Bundesliga leaders.

Both the club and player say they will sue magazine Sport Bild over the claim.

Vidal started against Leverkusen with Germany forward Thomas Mueller left on the bench as Guardiola played a back three after injuries left him with only one fit centre-back in Holger Badstuber.

Despite having scored 19 goals in as many league games this season, Bayern striker Robert Lewandowski failed to convert either of his two shots at goal.

Aubameyang, who has netted 20 league goals, had a rare off day in Berlin, managing just 11 touches in his 71 minutes and failed to create a single shot on goal.

The Gabon forward — Africa’s player of the year — was eventually hauled off by Dortmund coach Thomas Tuchel and was left scowling on the bench.

It was only the sixth time this season ‘Auba’ has failed to score in one of Dortmund’s league games.

Wolfsburg crashed to a 3-0 defeat at Schalke to remain winless in their last five games ahead of their Champions League last 16, first-leg clash at Ghent.

The result pushed the Royal Blues up to fourth as Wolfsburg drop to eighth.

Stuttgart are now up to 11th with their fourth straight league win in a bad-tempered 4-2 victory at Eintracht Frankfurt as both sides finished with 10 men.

Hanover 96 remain rooted to the bottom of the table after their 1-0 defeat at home to Mainz as Spanish midfielder Jairo scored the first-half winner, while mid-table Ingolstadt won the Bavaria derby with a 2-1 win at home to Augsburg.