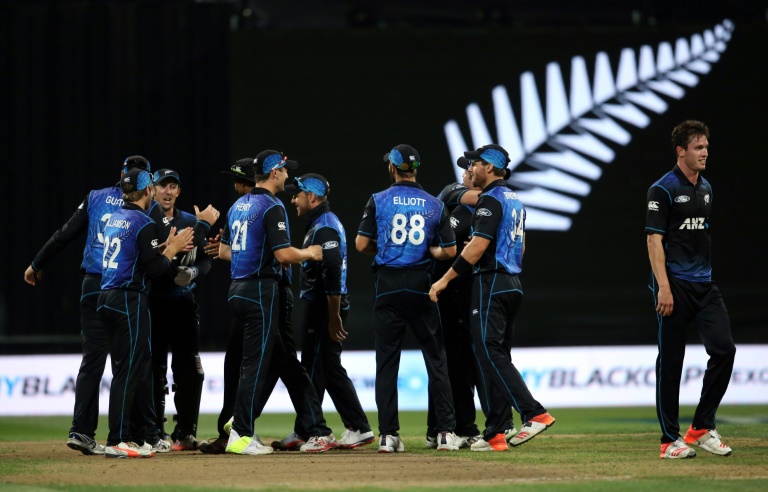 The victory in a game that was going Australia’s way until Henry’s dismissal of Mitchell Marsh, saw McCullum end his limited-overs career with a 2-1 series win over the world champions and the Chappell-Hadlee Trophy.

Australia, set a target of 247, had their tails up and needed 83 off the last 16 overs with five wickets in hand and Marsh, their match-winner in Sunday’s second tie, in full flow.

But the momentum swung back in New Zealand’s favour when a Henry delivery edged off Marsh’s bat, on to his foot, and rebounded back to the bowler.

The umpire turned down an appeal from Henry.

But when the replay on the big screen confirmed what Henry suspected the umpires called for an official review which showed the ball had not touched the ground and a clearly angry Marsh was out.

From there the Australian innings collapsed, with their last five wickets falling for 27 runs in 10 overs.

New Zealand had suffered an even more dramatic meltdown when they lost their last six wickets for 23 to be all out for 246.

McCullum, one of the biggest hitters in the game, reeled off 47 in 27 deliveries to give New Zealand a flying start.

His innings included three sixes to give him 200 sixes in his 260-match ODI career, which leaves him fourth on the overall list headed by Pakistan’s Shahid Afridi with 351.

With McCullum at the crease the New Zealand run rate was near 8.5 but slowed after his dismissal.

Martin Guptill, who had played a support role while his captain was at the crease, took 61 balls for his 59, his 30th half-century.

As in the second match in Wellington, won by Australia by four wickets, New Zealand found themselves losing momentum in the middle order.

Kane Williamson and Henry Nicholls were quickly in and out for 18 each before Elliott (50) and Corey Anderson (27) tried to regain the initiative with a 52-run stand.

When Anderson was dismissed New Zealand were set to mount a late assault at 223-5 with 10 overs remaining but they imploded instead.

Australia in reply raced to 75-1 before losing Usman Khawaja (44), Steve Smith (21) and Glenn Maxwell (0) as Doug Bracewell and Ish Sodhi kept New Zealand in the game with three for 19 in an economical 44 deliveries.

David Warner was dismissed early for 16, leaving Khawaja and Smith to build the innings and get valuable batting time before the first Test starting in Wellington on Friday.

Australia were 94-4 when Marsh went to the middle. He put on 59 with George Bailey for the fifth wicket and had reached 41 off 42 deliveries before his unusual dismissal and from there Australia folded.