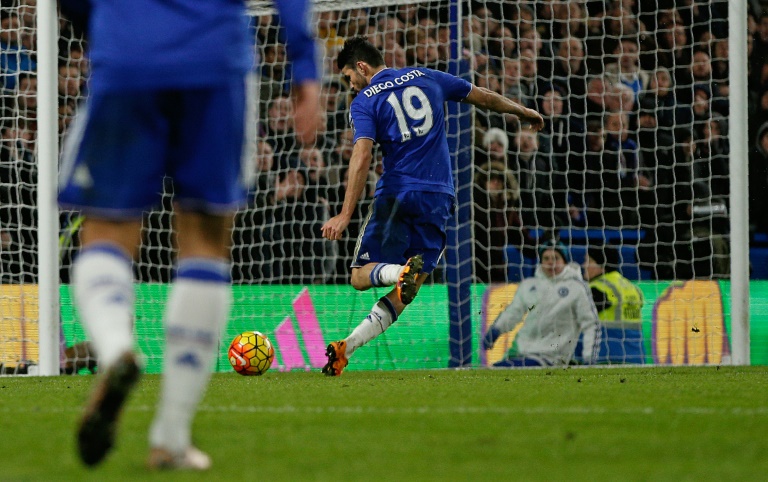 United looked to be closing to within four points of the Premier League’s top four after Jesse Lingard’s 61st-minute goal set Louis van Gaal’s men on course for a third consecutive win in all competitions.

But in the first of six minutes of injury time, added on for a serious-looking knee injury to Chelsea centre-back Kurt Zouma, Costa rounded David de Gea to score, extending Hiddink’s unbeaten run since succeeding the sacked Jose Mourinho to 10 matches.

Van Gaal bullishly dismissed speculation linking Mourinho with his job prior to the game, but finishes the weekend with his side six points below the top four.

Buoyed by breezy recent wins over Derby County, in the FA Cup, and Stoke City, in the league, United had made a strong start, with Anthony Martial testing Thibaut Courtois in the 18th minute.

Chelsea rallied, John Terry seeing a penalty appeal waved away after his shot hit Daley Blind on the arm, but after Zouma had been carried off following an awkward fall, United made the breakthrough.

Cameron Borthwick-Jackson’s cross was helped on by Wayne Rooney and Lingard took a touch before slamming in his second goal in two games.

But after United goalkeeper De Gea had saved from Branislav Ivanovic and Cesc Fabregas, Costa equalised in stoppage time when he gathered Fabregas’s pass, rounded De Gea and slotted home.

Earlier, Mesut Ozil and Alex Oxlade-Chamberlain scored twice in a minute as Arsenal got their title challenge back on track by winning 2-0 at Bournemouth.

Arsenal had slipped to fourth in the table after going four games without a win, but victory at Dean Court took them up to third, level on points with second-place Tottenham Hotspur and five points below leaders Leicester City, who visit the Emirates Stadium next Sunday.

“We had a strong start, with good finishing, and we controlled the game,” Arsenal manager Arsene Wenger told the BBC.

“We beat a good side. It was three difficult points, but three very important points for us because we had not won for a while.

“It was a must-win game for us today. Leicester have made a big impression in the last week after their results. They suddenly become the favourite in the Premier League and it makes our game a big game.”

Ozil opened the scoring in the 23rd minute, skilfully slamming home right-footed after Olivier Giroud nodded down Aaron Ramsey’s flighted pass to claim his first goal since the 2-0 win over Bournemouth on December 28.

Ramsey was also the architect of Arsenal’s second goal a minute later, slipping a pass wide to the overlapping Oxlade-Chamberlain, who drilled a low shot in off the left-hand post for his first away goal in five years.

“We were slow out the blocks today, which is unlike us,” said beaten manager Eddie Howe, whose side remain five points above the relegation zone.

“If you give a team like Arsenal time on the ball they will punish you.”