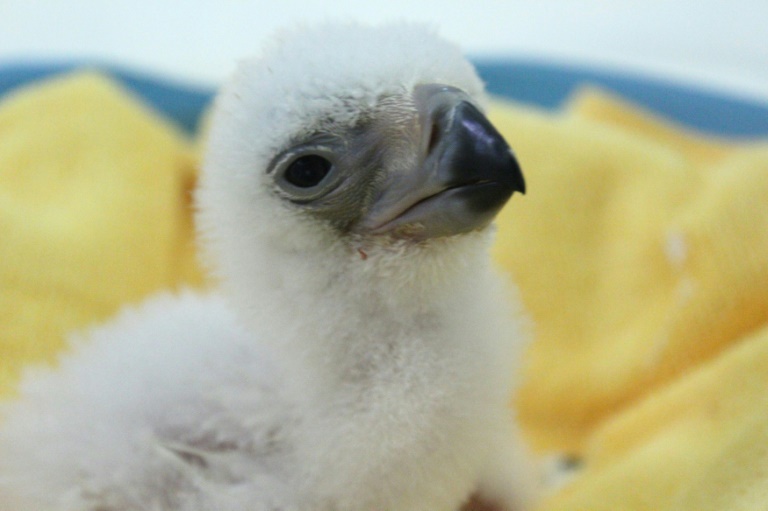 A Philippine breeding centre trying to save the country’s critically endangered monkey-eating eagle has been so successful it is now scrambling for space, officials said Monday.

Another eaglet was hatched last week, the second in barely three months, helping the giant bird’s fight against extinction.

The chick, born from the natural mating of two birds at the Philippine Eagle Foundation, is the 27th born in captivity said its curator Anna Mae Sumaya.

“The centre is at full capacity. We are full. If there are any new admissions, we will have to move the birds to smaller enclosures,” she told AFP.

The new chick, hatched on February 4, is the 35th eagle at the centre, joining 19 other captive-bred birds and 15 rescued from the wild, she said.

The seven other eagles born in captivity have either been released into the wild or died.

Sumaya described the new chick as “active and alert as it can already lift its head, sit and follow objects even at a day old”.

But the breeding centre on the outskirts of Davao city on the country’s southernmost island of Mindanao covers just eight hectares (20 acres), she said.

“If we could have a lot of space, we could pair off a lot more birds,” she said, stressing that breeding pairs needed more space.

The monkey-eating eagle, also known as the Philippine eagle, is found only in the rapidly vanishing tropical rain forests of the Philippines.

The metre-long (3.3-foot) raptor gets its name from its diet of macaque monkeys and other small animals that share its habitat in Mindanao.

The bird is famed for its elongated nape feathers that form into a shaggy crest. Its two-metre wingspan makes it one of the world’s largest eagles.

The raptor is found nowhere except the Philippines, where it is the country’s national bird.

There are about 600 monkey-eating eagles in the wild.

The Swiss-based International Union for the Conservation of Nature lists the monkey-eating eagle as “critically endangered” due to hunting and the depletion of its habitat.

Gunshots account for nine in every 10 Philippine eagle casualties, according to the foundation, which has also warned it was running out of safe places to release the captive-bred birds when they mature.

The monogamous eagles breed only once a year, with each pair producing only one egg every mating season.