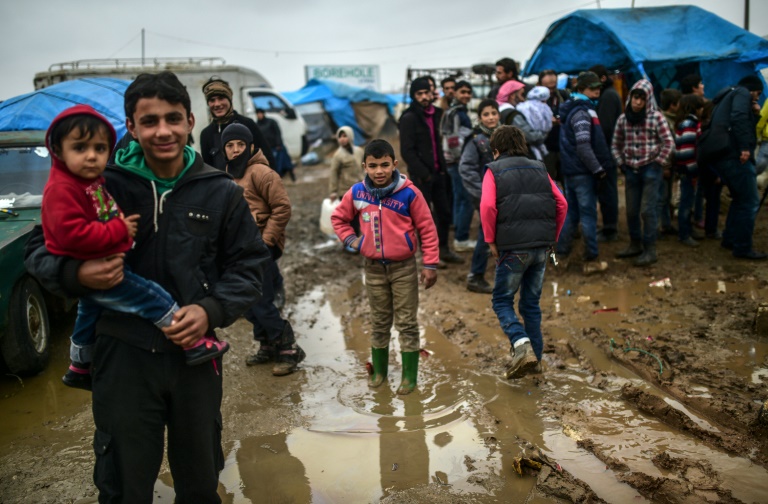 Turkey is ready “if necessary” to let in tens of thousands of Syrian refugees trapped on its border after fleeing a regime assault, Turkish President Recep Tayyip Erdogan said.

Thousands of Syrians, mostly women and children, have fled toward the Turkish border since Friday from the northern Syrian city of Aleppo to escape a major regime offensive backed by Russian air strikes.

“The regime has now blocked a part of Aleppo… Turkey is under threat,” Erdogan told reporters on his plane returning from Senegal on Saturday, quoted by Anatolia news agency.

“If they reached our door and have no other choice, if necessary, we have to and will let our brothers in,” he said.

The governor of Turkey’s Kilis border province, Suleyman Tapsiz, said Saturday that Turkey — already home to around 2.7 million Syrians according to the latest government figures — was taking care of 30-35,000 refugees who had gathered around the nearby Syrian city of Azaz in the space of 48 hours.

Another 70,000 may head for the frontier if Russian air strikes and Syrian regime military advances continued in Aleppo, he added.

Turkey’s Oncupinar border crossing, which faces Bab al-Salama inside Syria, remained closed to thousands of refugees gathered there for a third day, an AFP reporter said.

They braved cold and rain waiting desperately for the moment the gate will open, as Turkish aid trucks delivered food inside Syria.

“But the border keeps open for emergency situations,” a Turkish official told AFP.

“Seven injured were taken to Turkey on Friday and one on Saturday for treatment at Turkish hospitals,” he said.

The European Union on Saturday said it was Ankara’s international obligations to keep its frontiers open to refugees while pressing the Turkish government to help stem the flow of migrants to Europe.

Erdogan again dismissed Russia’s claims that Turkey was actively preparing to invade Syria, saying Moscow itself was an “invader.”

He also argued that Moscow and President Bashar al-Assad were together responsible for the deaths of thousands of civilians in the Syrian civil war.

“We should ask Russia: What are you doing in Syria? Basically you are an invader,” he said on the plane.

Ties between Moscow, which supports the regime of Assad, and Ankara, which is a staunch backer of the opposition, have been in tatters since Turkey shot down a Russian warplane on the Syrian border in November, claiming it had entered Turkish airspace.

Following a request from Assad, Moscow launched a bombing campaign in Syria in September, saying it needed to target jihadists like the Islamic State group before they cross into Russia. But air strikes have also hit the rebels opposed to Assad.

Erdogan said his country would do “whatever necessary” in the face of a threat, saying: “Right now we, our security forces, are prepared for any eventuality.”