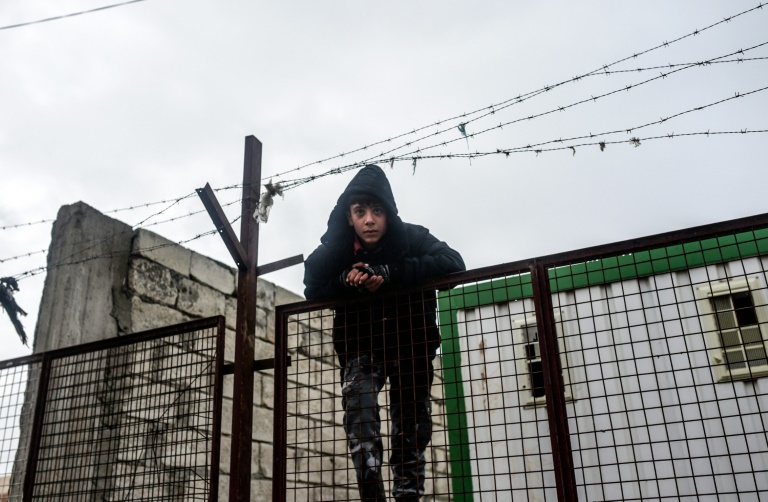 Thousands of Syrians braved the freezing cold at Turkey’s border Saturday after fleeing a regime assault that threatens a new humanitarian disaster, as Damascus warned Riyadh and Ankara not to send in troops.

The government said any uninvited foreign soldiers who enter Syria would go home “in a wooden coffin”, following reports that Saudi Arabia and Turkey, which support rebel forces, could deploy troops.

Tens of thousands of people have fled fierce fighting as government forces backed by Russian air strikes advanced this week against rebels, severing the opposition’s main supply route into the northern metropolis of Aleppo.

The United Nations said some 20,000 people had gathered at Bab al-Salama but the governor of Turkey’s Kilis border province, Suleyman Tapsiz, said at least 70,000 may head for the frontier.

Tapsiz said the displaced were being accommodated in eight camps on the Syrian side and that Turkey — already home to between 2-2.5 million Syrians — is also able to take care of 30-35,000 refugees inside Syria.

“We still keep this open border policy for these people fleeing from the aggression, from the regime as well as air strikes of Russia,” he said.

According to the Britain-based Syrian Observatory for Human Rights, around 40,000 Syrian civilians have fled the regime offensive.

“Thousands have been sleeping in the open, in fields and on roads,” on the border and in the nearby Syrian city of Azaz, said Mamun al-Khatib, director of the Aleppo-based pro-rebel Shahba Press news agency.

“And because the main rebel supply route between Aleppo and Turkey has been cut, the price of oil, foodstuffs and baby milk has shot up in the north of Aleppo province,” he added.

The Observatory said 435 people have been killed since the regime offensive began on Monday, including 71 civilians, most of whom had died in Russian air strikes.

Riyadh on Thursday said it would “contribute positively” if the US-led coalition against the Islamic State (IS) jihadist group in Syria decides on ground action.

Russia, key ally of the Damascus government, accused Turkey of “preparations for an armed invasion” of Syria, a claim that Ankara dismissed.

Syria’s Foreign Minister Walid Muallem issued a stiff warning against any such move.

“Any ground intervention on Syrian territory without government authorisation would amount to an aggression that must be resisted,” he said.

“Let no one think they can attack Syria or violate its sovereignty because I assure you any aggressor will return to their country in a wooden coffin, whether they be Saudis or Turks,” he added.

Muallem also warned that fighting could only end “if IS, Al-Nusra and (other) Al-Qaeda-linked groups are defeated”.

“I don’t think they would dare do that… If they do, they will inflict a coup de grace on themselves,” said Major General Ali Jafari said.

Turkey last faced such an influx in 2014 when 200,000 refugees fled the Syrian Kurdish town of Kobane over three days as IS and Kurdish fighters battled to control it.

Trucks were seen on Friday carrying tent parts to the refugee camp near the border gate on the Turkish side, and at least four more were seen returning to Turkey after delivering food in Syria.

A Red Cross spokesman told AFP that efforts were under way to deliver aid to northern Aleppo but warned that “access is difficult”.

Aleppo city, Syria’s former economic powerhouse, has been divided between opposition control in the east and regime control in the west since mid-2012.

Syria’s army has recaptured several key rebel towns in Latakia province and advanced in Aleppo and Daraa since Russia began air strikes on September 30 in support of President Bashar al-Assad.

Western nations have accused Damascus of sabotaging UN-backed peace talks that collapsed this week with its military offensive, and Washington has demanded Moscow halt its air war.

On Saturday, the powerful Ahrar al-Sham rebel group said it was pulling out of the Geneva talks in protest at the regime’s Aleppo offensive.

Top diplomats from countries trying to resolve the conflict are set to meet again next week after UN envoy Staffan de Mistura suspended the floundering Geneva negotiations until February 25.

More than 260,000 people have been killed in Syria’s conflict and more than half the population has been displaced.