Home Sports Satisfaction all round as France edge out Italy 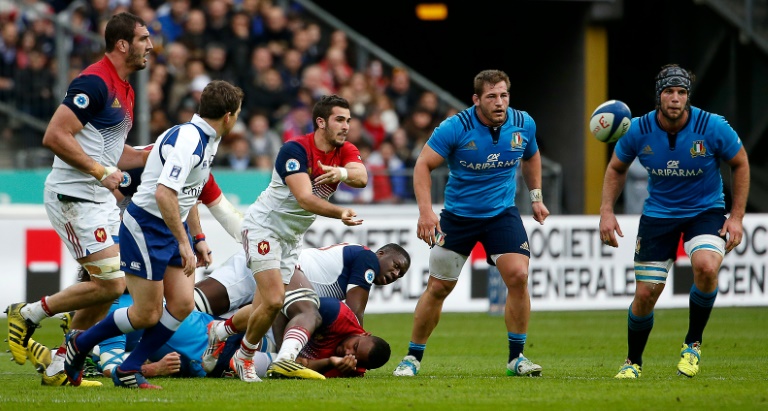 France and Italy came away from their tight Six Nations clash at the Stade de France on Saturday equally satisfied.

The hosts snatched a 23-21 success thanks to Jules Plisson’s penalty four minutes from the end but both France coach Guy Noves and his Italy counterpart Jacques Brunel claimed to be pleased.

“It’s always interesting when you win, even though our aim is to work on consistency and improving things,” said Noves, who succeeded Philippe Saint-Andre following France’s World Cup quarter-final exit against New Zealand last October.

“We started from a long way back with only a short period to prepare, it’s a young team. If we could have won by more we wouldn’t have deprived ourselves of that but Italy could also have won so we’re not complaining.

“We’ll take the enthusiasm we showed in some moments, although we lacked lucidity, and for sure there was a lack of tempo in the first half. We left points on the field and were weak defensively.

“That allowed Italy to dominate the ball and exploit some of our weaknesses. We were in difficulty at that point, but the enthusiasm was there.”

Both sides picked four debutants to start the match as well as two more from each team coming on from the bench.

The match was close throughout and Italy even had a late chance to snatch the victory but captain Sergio Parisse badly skewed his drop-goal attempt with time up.

“Of course I’m disappointed because I tried the drop-goal and hoped to succeed,” said Parisse, Italy’s enigmatic lynchpin.

“I was in the pocket at that moment, I was well placed to try. I took the initiative, I took responsibility.

“If it goes over it’s a good decision but if it doesn’t then we should’ve done something else.”

Nonetheless, French coach Brunel, who is taking charge of his final Six Nations tournament with Italy before likely being replaced by current Harlequins coach Conor O’Shea in the summer, was still pleased with his charges.

“Given the score at the end we’re disappointed to lose the game, of course,” he said.

“But it could’ve been different for us. We showed desire and ambition to take on difficult opponents; we showed character and an identity.

“That was our starting point and throughout the game we matched France in terms of intensity and ability, and that’s important.

“Although we had some young players without much experience, we showed that and we’ll take the positives.”

When New Zealand-born replacement Kelly Haimona kicked a penalty six minutes from the end, Italy led 21-20 and Noves admitted he was worried his tenure would begin with a historic first home defeat to the Azzurri in the Six Nations.

“When we conceded that penalty six minutes from the end (I was worried) but thankfully Jules landed his penalty from 50 metres and right out on the touchline.

“At that moment, yes (I was worried) but it changes nothing. Although I’m delighted by the win because the team is young, the criticism from me and my staff would be the same regardless of the outcome of the match.”