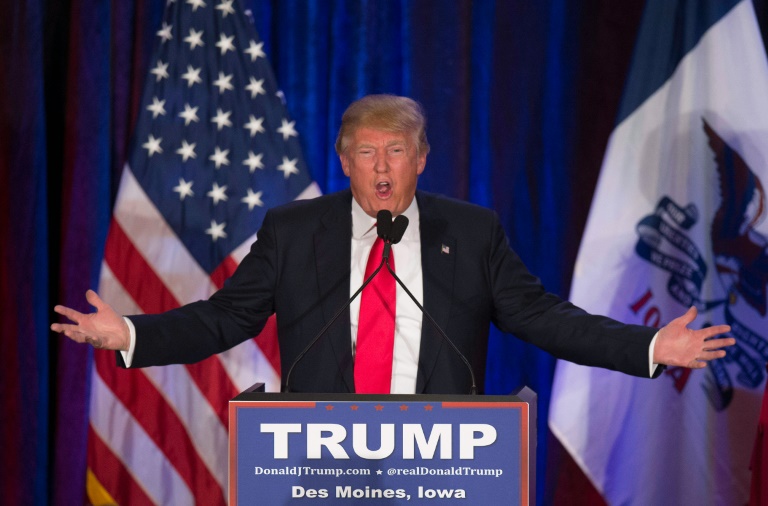 Seven Republicans campaigning to be US president are in a fight for survival in their last debate Saturday before the New Hampshire primary, battling to win over a significant number of undecided voters.

New York billionaire Donald Trump, left bruised by finishing a distant second in Iowa after boycotting the last debate, will be center stage as head of the polls, hoping a strong performance will secure him victory in the first 2016 election primary Tuesday.

He will be flanked by telegenic Florida Senator Marco Rubio, in second place in the New Hampshire polls, and evangelical conservative Ted Cruz, who won a decisive victory in Iowa, which held caucus elections this week.

Next come three current or former governors, son and brother of two US presidents Jeb Bush, Ohio’s John Kasich and New Jersey’s Chris Christie, whose presidential dreams could be made or broken on Tuesday.

Ben Carson, the retired neurosurgeon whose fortunes have skidded him into relative national obscurity, makes up the seventh candidate on stage for the primetime debate broadcast by ABC News.

The debate kicks off 8:00 pm (0100 GMT Sunday) at St Anselm College, a Catholic, liberal arts university with a picturesque campus on a hilltop overlooking Manchester, founded in 1889 by Benedictine monks.

New Hampshire’s famously independent-minded voters are proud of the role they play in the first primary that gives the winners enormous momentum going forward and can mortally puncture losers’ ambitions.

The candidates have crisscrossed the state, holding town hall meetings, jostling with voters at restaurants as they give stump speeches, shake hands, pose for selfies and greet children.

Even if Trump does win the Republican vote in New Hampshire, the eyes of the party establishment, appalled by his insults, incendiary rhetoric and lack of political experience, will focus on his rivals.

The latest Quinnipiac University national poll released Friday said 30 percent of Republicans “would definitely not support” Trump and cited Rubio as the candidate most likely to win a general election.

If Rubio puts in a good performance at the polls, capitalizing on his strong third-place finish in Iowa, it will likely confirm him as the establishment candidate of choice for the nomination.

His team has announced a string of new congressional endorsements all week, crowned by former Louisiana governor Bobby Jindal on Saturday, projecting a sense of confidence and mainstream electability.

But if Bush, Kasich or Christie do well in New Hampshire, it will elevate them to contender status for the middle ground.

After accusing Cruz of stealing the Iowa caucuses, Trump on Saturday took a swipe at Bush, whose mother — former first lady Barbara Bush — has hit the campaign trial with him in New Hampshire.

“Wow, Jeb Bush, whose campaign is a total disaster, had to bring in mommy to take a slap at me. Not nice!” the former reality star tweeted.

Bush lashed out on Friday, telling voters in Concord that Trump had been “hurtful,” “insulting” and “unconscionable” in his remarks denigrating women, Mexicans, Muslims and the disabled.

“I’m not a professional, but there are some deep insecurities going on in his head,” he said to laughter and applause.

In New Hampshire, Trump commands 35 percent of support among likely Republican voters, a 21-point lead over Rubio on 14 percent, according to the latest 7News/University of Massachusetts Lowell poll.

But with nine percent undecided, there is everything to play for.

Rene Paquin, a middle-aged mobility instructor for blind people, said he thought this year’s election was so important that he went for the first time to a campaign rally.

“In large measure, this has been such a wonderful year for us, because we’ve had Donald Trump who is an interesting character,” Paquin said.

“He says a lot of things that people think but I’m not sure he is so well credentialed that we feel that he can carry our country as president.”

A registered Republican, he said he was drawn by both Bush and Rubio, but had braved the snow to listen to Bush in Concord late Friday.

“I’m looking for someone with integrity, someone who’s going to tell us the truth and someone who thinks that they can really make a difference,” Paquin told AFP.