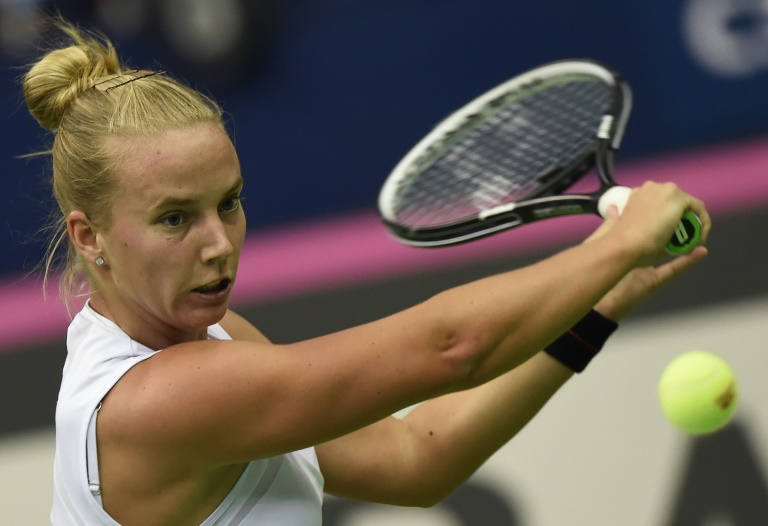 The Netherlands took a shock 2-0 lead over Russia in the Fed Cup on Saturday on the back of a four-hour win for Richel Hogenkamp against Svetlana Kuznetsova in the tournament’s longest ever singles rubber.

At four hours, it was the longest singles rubber in Fed Cup history, beating the previous best set in 2005, when Vilmarie Castellvi of Puerto Rico beat Aleksandra Wozniak of Canada in three hours and 49 minutes.

“I’m very happy that I’m the one who could make it 2-0,” said Hogenkamp who saved a match point at 6-7 in the decider.

“And of course it feels great to win the longest match in Fed Cup history.

“I was trying to play my own game and it worked well. It’s a good score after the first day but in Fed Cup you still need to win three rubbers so we’re not there yet.”

Four-time champions Russia now face a dilemma over whether or not to name Maria Sharapova in Sunday’s reverse singles despite the world number six insisting a forearm injury would restrict her to just the doubles clash which will conclude the tie.

Makarova, still feeling her way back from a heel injury suffered last year, admitted Bertens was a deserving winner.

“Normally it’s my tactic to stay in the rally, but perhaps I was not that aggressive as I should have been. I played too short and Kiki was a little bit more into the court,” said left-handed Makarova.

Defending champions the Czech Republic were also in a dogfight in Cluj where they ended the day at 1-1 against Romania.

It was 23-year-old Pliskova’s first win over Halep in four meetings.

Australian Open champion and world number two Angelique Kerber got Germany’s first round match against Switzerland back on track in Leipzig with a 6-1, 6-3 win over Timea Bacsinszky.

“I felt the tiredness in the second set, but the spectators helped carry me through,” said Kerber, who was playing her first match since stunning Serena Williams in the Australian Open final last weekend.

The Swiss had taken the lead in the tie when 18-year-old Belinda Bencic, the world number 11, swept past Andrea Petkovic, 6-3, 6-4.

In Marseille, France and Italy were locked at 1-1.

Italy, who have been champions four times since 2006, are bidding to reach the semi-finals for the seventh time in eight years.

In World Group II, where the eventual winners will face the Group I losers in play-offs for the elite pool next season, Spain were 2-0 ahead of Serbia while Australia and Slovakia were level at 1-1.