Home Sports Ozil, Ox get Arsenal back to winning ways 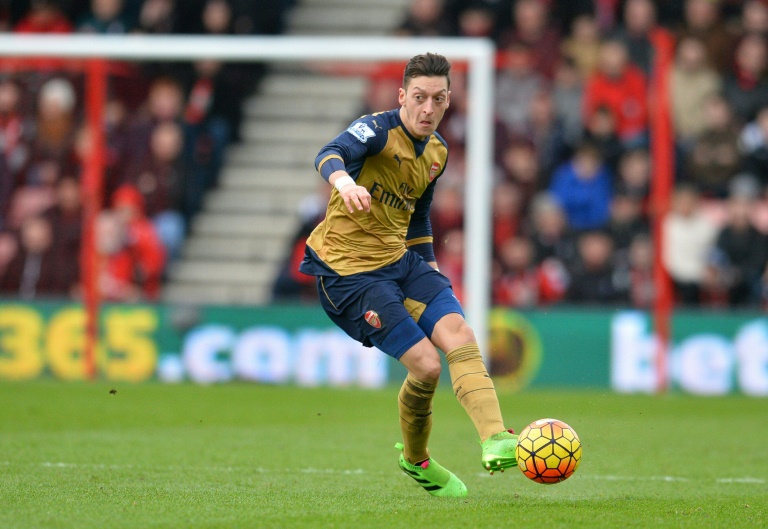 Arsenal returned to third place in the Premier League after Mesut Ozil and Alex Oxlade-Chamberlain’s goals ended a four-game winless streak with a 2-0 victory at Bournemouth on Sunday.

Arsenal arrived at Dean Court with their title challenge under threat after a poor run in January capped by a failure to score in their previous three league matches.

But two goals in a minute midway through the first half were enough to move them back level on points with second-place Tottenham Hotspur, five points behind leaders Leicester City, who visit the Emirates Stadium in seven days’ time.

The progress of near neighbours Tottenham has only added to Arsenal’s frustration as they have struggled to rediscover the form that took them to the head of the table.

But manager Arsene Wenger could be satisfied with the way his side showed signs of the form that took them to the league summit at the turn of the year, with Oxlade-Chamberlain’s first league goal of the season a welcome bonus.

Bournemouth’s recent results showed that Wenger’s side could not afford to take anything for granted, with Eddie Howe’s team unbeaten in their previous three league games, including an impressive mid-week victory at Crystal Palace.

The presence of Benik Afobe in the home line-up also gave the Gunners cause for concern, with the 22-year-old anxious to impress against his former club after revealing his frustration at having never been given a first-team chance at the Emirates Stadium.

Afobe left 13 months ago and has already made his mark in the top flight with three goals in four games since completing a Â£10 million ($14.5 million, 13.3 million euros) move from Wolverhampton Wanderers last month.

A positive start by Howe’s men meant that Arsenal were given little time to settle and the hosts were convinced that Mathieu Flamini â€“- selected ahead of Francis Coquelin, who started on the bench â€“- should have seen red rather than yellow for a studs-up challenge on Dan Gosling.

Aaron Ramsey was the provider for the first goal, clipping a ball towards the far post for Olivier Giroud, whose headed knock-down enabled Ozil to finish smartly from 10 yards out in the 23rd minute.

Less than a minute later, the visitors added a second, with Ramsey again the architect.

This time the midfielder picked up a loose ball after Alexis Sanchez’s forward run had been halted before releasing Oxlade-Chamberlain on the right side of the area, from where the winger finished well with an angled shot that went in off the left-hand post.

Oxlade-Chamberlain has endured a frustrating run of injuries over the last couple of seasons and this was the first time he had been involved in a league goal since September 2014.

The game could have been over if the referee had not ignored Arsenal’s claims for a penalty when Nacho Monreal went down under a challenge from Matt Ritchie.

But with Bournemouth’s first-half response limited to an excellent dipping shot from Harry Arter that drew an acrobatic save from Petr Cech, there seemed little chance of a comeback.

The home side’s response after the break, however, suggested there was no lack of belief among Howe’s players.

They came close to getting back into the game when Adam Smith shot into the side netting and it took a late double save from Cech, who denied first Simon Cook and then Arter, to preserve the visitors’ clean sheet.