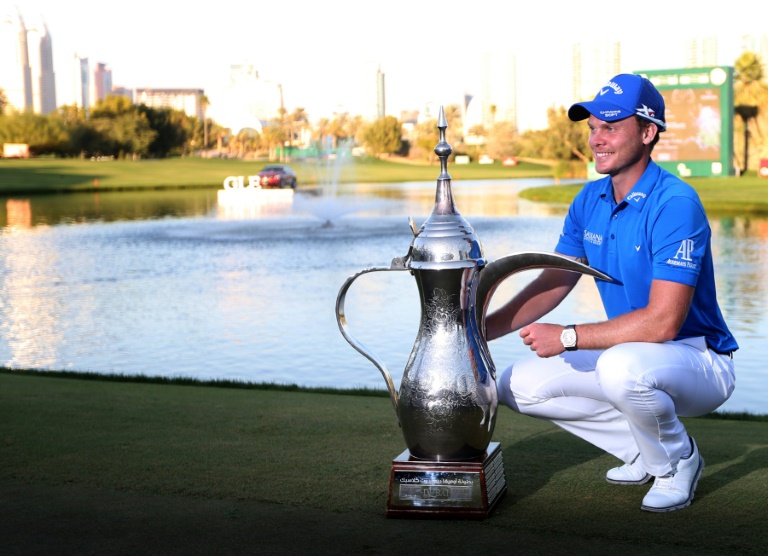 Overnight leader Danny Willett battled hard to hold on to his lead on Sunday and got his reward with a final green, one shot win in the $2.5 million Dubai Desert Classic.

At the Emirates Golf Club, the Englishman was finally caught up by the unrelenting chasing pack of Andy Sullivan and Spainâ€™s Rafael Cabrera-Bello on the 18th hole.

But the world number 20 stepped up and made a pressure-packed 15-feet birdie putt to win his fourth European Tour title.

Willett, who had opened up a three-shot lead mid-way through the front nine, had to battle hard on the back nine.

And as his rivals started making more birdies on the easier back nine, Willett had to grind out pars to stay ahead.

Sullivan, who had finished second in Dubai less than three months ago to Rory McIlroy in the DP World Tour Championship, made a birdie on the difficult par-3 15th hole, and then saved remarkable pars on the 16th and 17th holes after hitting errant drives.

But when it mattered the most â€“ on the 18th hole â€“ he hit a superb wedge third shot that spun back several yards and left him with a curling 12-feet birdie putt to get to 18-under par.

Sullivan did that to finish with a four-under par 68, and was joined at 18-under par moments later by Cabrera-Bello.

The Spaniard birdied the 17th hole and hit two towering shots to set up an eagle putt from the back of the green.

However, his effort from 35 feet just slid past the hole, leaving him with a tap-in birdie.

Willett hit a good tee shot on the 18th, but rolled into the rough and had to lay up with his second.

The approach shot wasnâ€™t the best and left him with a testing 15 feet downhill putt to win the tournament outright, but he nailed it right in the middle.

Willett, who is expected to move into the top-15 of the world rankings for the first time in his career with the victory, said: “Itâ€™s always great to come out early in the season and win.

“Everything Iâ€™ve done has been really good this week, and mentally Iâ€™ve been as good as I have been for a long, long time.

“I stayed patient and let things happen. Itâ€™s very nice to know that I can dig deep and produce what I can when it is needed the most.

“Youâ€™d love to win by five or six every time you win, but when you win in that fashion, it does feel that little bit extra special.

“It means when the pressure is on I can produce the goods.â€

Sullivan felt he did not do enough in the middle of the round and said: “Fair play to Dan, holing that putt, that was a tough putt.

“I didnâ€™t feel like I put him under enough pressure through the midpoint of the round. Had a lot of chances and didnâ€™t quite take them.”

World number two Rory McIlroy finished with a seven-under par 65 round, but that was good only for tied sixth place at 15-under par 273 alongside world number six Henrik Stenson (66).

And McIlroy, who could only make a par on the par-5 18th hole, said: “It was okay I guess. Sort of got it going today a little bit better and played the front nine better.

“Played nicely for the most part but disappointed about the 18th. I made a wrong decision off the tee by not hitting the driver.

“But all in all, it was a decent weekend and decent way to play the last 27 holes, anyway.

“The game feels in decent shape. Struggling with the driver a little bit, so just want to try and work on that.

“Got a week off to work on those things and get ready for LA in a couple weekâ€™s time.”

Spain’s Alvaro Quiros and Koreaâ€™s Byeong Hun-An were tied fourth at 272 with identical rounds of seven-under par 65 each.