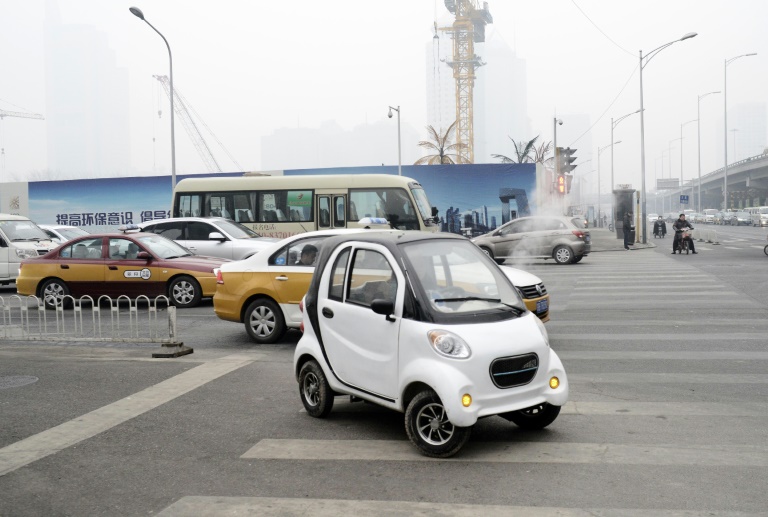 Government subsidies are fuelling a boom in electric vehicles in China, driving hopes for the industry’s global future as the world’s biggest car market offers economies of scale that could make the technology mainstream.

Sales of electric cars, though still modest, have rocketed four-fold in a year — thanks in part to lavish government handouts — as Beijing looks to cut down on dangerous air pollution that shrouds urban areas.

The sector has been a contrast with the rest of the market for cars in China, where growth has slowed markedly alongside the wider economy.

And observers say if carmakers can crack China, with its vast population and burgeoning middle class, the rest of the planet could follow.

“If China gets moving on electric cars then that would automatically lower prices and have a favourable ripple effect across the whole world,” said Ernst and Young auto expert Jean-Francois Belorgey.

“Pollution levels mean the government has no other choice” than to encourage the development of new energy vehicles, he added.

While much of the pollution comes from coal burning for industry, vehicle exhausts exacerbate the problem.

Only 331,000 of the 24 million new cars sold in China last year were electric or plug-in hybrids.

Growing public anger has propelled Beijing to act, with central government subsidies of up to 55,000 yuan ($8,400) for buyers of zero- or low-emission vehicles, which are often matched by local authorities.

The government says it wants five million “green” vehicles on the road by 2020 in the country of more than one billion people.

Drivers of such cars can also avoid restrictions imposed on heavy smog days, when some cities limit vehicles according to their licence plate.

They are also exempt from lotteries for plates several cities have set up in an attempt to cap on the total number of cars.

Domestic firms have benefited, with Warren Buffett-backed Chinese firm BYD claiming to be the biggest electric vehicle maker in the world.

China’s Geely, which owns Volvo, is another major player, and says it wants to shift 90 percent of its sales to hybrid and electric vehicles by 2020 with the government’s blessing.

The subsidy incentives only apply to domestic brands, not foreign manufactured cars, and the government says it will gradually phase them out by 2020 to ensure the sector does not become dependent on handouts.

Despite the handicap, foreign firms have also tried to cash in on the potential gold rush.

France’s Renault is one of a growing number of foreign manufacturers that see China as an ideal test ground for low-cost electric vehicles that can attract buyers in other markets.

The company opened its first Chinese factory last Monday in the central industrial hub of Wuhan and will start to produce electric cars there as early as next year, in cooperation with local company Dongfeng.

US giant General Motors is making and selling its hybrid Cadillac CT6 in China, and exporting it to the United States, according to reports.

Its American rival Ford has announced it will invest $4.5 billion in electric cars between now and 2020, adding 13 models to its range, with a particular focus on China.

Mercedes-Benz also sells several hybrid models in China, and Nissan has a version of its electric Leaf on the Chinese market, and has found favour with domestic consumers.

But as with other parts of the world, the market still remains on the margins because relatively high costs and a lack of charging stations has dampened public enthusiasm.

Another problem is that China generates most of the electric power which would be used to charge the cars from coal burning — the biggest source of the country’s smog.

Analysts say that if they are charged from a mostly coal-powered electricity grid, pollutant emissions from electric cars could be higher than their petrol equivalents.

Plug-in hybrids may have the most growth potential, Jia believes, since they use a combination of combustion and a rechargeable electric battery, allaying drivers’ worries about short-lived batteries.

Nevertheless, Hu Xindong, executive vice president of Dongfeng-Renault in China, is confident that “the demand is here”.

“The market is definitely going forward”, he said.

“In five or 10 years time, electric vehicle technologies and the production volume can only grow enormously”.