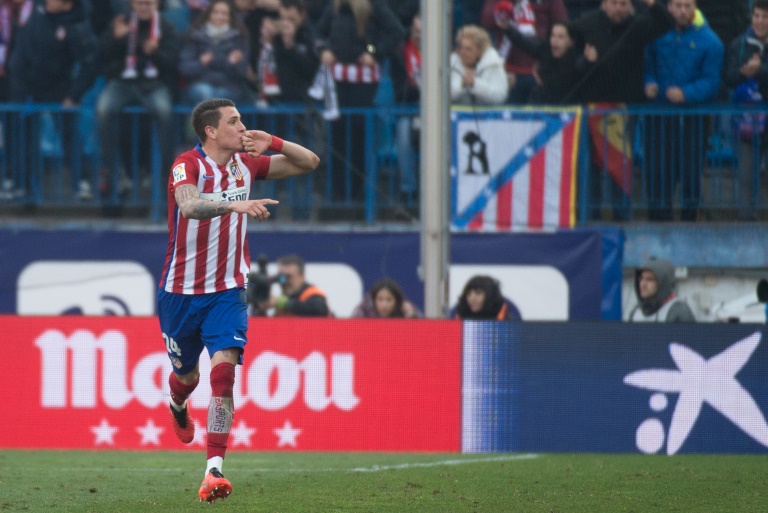 Fernando Torres scored his 100th Atletico Madrid goal as Los Rojiblancos came from behind to move level on points with Barcelona at the top of La Liga thanks to a 3-1 win over Eibar on Saturday.

Barca, who have two games in hand on Atletico, travel to face Levante on Sunday.

Atletico’s first win in five games opens up a four-point lead over third-placed Real Madrid, who are also in action on Sunday away at Granada.

“To score 100 goals for this club is something that will stay with me forever,” Torres told Canal Plus.

“It is an important moment in his sporting life at the club where he has always belonged,” added Atletico boss Diego Simeone.

Atletico were without four defenders as Diego Godin, Filipe Luis and Juanfran were all suspended from last weekend’s 2-1 defeat at Barcelona, whilst Stefan Savic was injured.

However, their makeshift defence wasn’t tested in a first-half short on chances as Antoine Griezmann volleyed over from a narrow angle, whilst Angel Correa had a strong penalty waived away.

Atletico were stunned a minute after the restart when Niguez – who was deputising out of position at centre-back – slipped and allowed Sergi Enrich to square for Keko to calmly lift the ball over the advancing Jan Oklak to open the scoring.

The goal shocked Atletico into action, though, and they turned the game around with two goals in eight minutes.

Firstly, Gimenez powered in at the near post to meet Koke’s in-swinging corner for his first goal of the season.

And from another dangerous Koke corner, Saul was left unmarked to head in despite Abel Riesgo getting a hand to his effort.

Yannick Carrasco fired inches wide and Luciano Vietto had a goal narrowly ruled out for offside as Atletico looked to kill the game off.

Torres was given a standing ovation as he was brought on for the final 15 minutes with his future beyond the end of the season uncertain due to a transfer ban hanging over the club which could prevent Atletico making his loan move from AC Milan permanent.

However, the former Liverpool and Chelsea did finally find the net for the first time since the sides last met in September when Vietto’s excellent low cross left him with the simple task of tapping into an empty net in stoppage time.