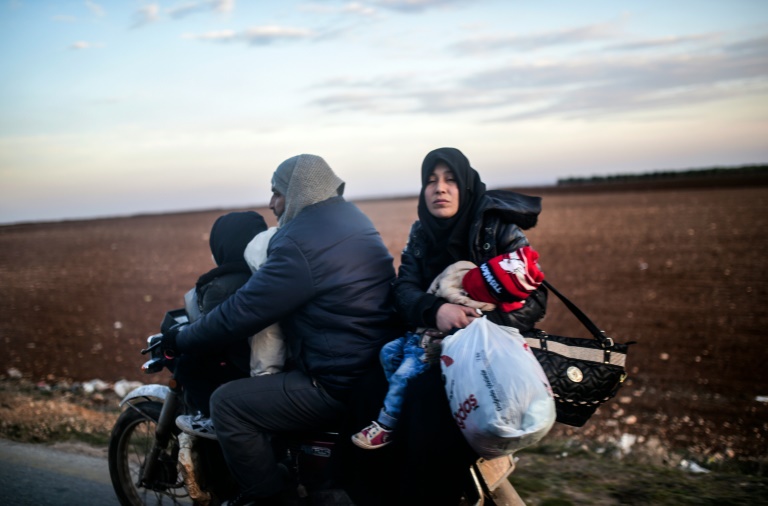 Thousands of Syrians were braving cold and rain at the Turkish border Saturday after fleeing a Russian-backed regime offensive on Aleppo that threatens a fresh humanitarian disaster in the country’s second city.

Tens of thousands have escaped fierce fighting as government forces unleashed an advance this week against rebels, severing the opposition’s main supply route into Aleppo.

On Saturday morning, Turkey’s Oncupinar border crossing — which faces Bab al-Salama on Syrian soil — remained closed, an AFP correspondent said, as Turkish authorities said they were working to free up space within existing camps to accommodate the new arrivals.

“Our teams are ready to provide them with water and food as soon as they arrive,” Turkish Red Crescent head Ahmet Lutfi Akar said.

Around 40,000 civilians have fled their homes over the regime offensive, according to the Syrian Observatory for Human Rights monitor.

“The situation of the displaced is tragic,” Observatory director Rami Abdel Rahman said.

“Families have been sleeping outside in the cold in fields and tents with no international NGO there to help them. They’re helping each other.”

EU officials on Saturday reminded Turkey of its international obligations to keep its frontiers open to refugees camped on its southern border.

“The Geneva convention is still valid which states that you have to take in refugees,” EU Enlargement and Regional Policy Commissioner Johannes Hahn said as he went into talks with European foreign ministers.

The UN’s Office for the Coordination of Humanitarian Affairs (OCHA) said on Friday it estimated “up to 20,000 people have gathered at the Bab al-Salama border crossing and another 5,000 to 10,000 people have been displaced to Azaz city” nearby.

Turkey is already home to between two and 2.5 million Syrians who have fled their country’s five-year civil war.

Aleppo province is one of the main strongholds of Syria’s opposition, which is facing possibly its worst moment since the country’s brutal conflict began.

OCHA spokeswoman Linda Tom said another 10,000 people were thought to have been displaced to the Kurdish town of Afrin, also in northern Aleppo province.

She said the fighting had also disrupted major aid and supply routes from the Turkish border.

On Friday, many Syrian refugees in Turkey headed to the crossing point in a bid to obtain news of their families.

But none were present on Saturday due to rain, an AFP journalist said.

Trucks were seen Friday carrying parts for tents to the refugee camp close to the border gate on the Turkish side.

At least four Turkish aid trucks were also seen returning to Turkey after making deliveries of food inside Syria.

Turkey last faced such an influx in 2014 when 200,000 refugees fled the Syrian Kurdish town of Kobane over three days as the Islamic State group and Syrian Kurdish fighters battled for its control.

A Red Cross spokesman told AFP that efforts were underway to deliver aid to northern Aleppo but warned that “access is difficult”.

Aleppo city, Syria’s former economic powerhouse, has been divided between opposition control in the east and regime control in the west since mid-2012.

Syria’s army has recaptured several key rebel towns in Latakia province and advanced in Aleppo province and in Daraa in the south since Russia began a aerial campaign on September 30 in support of President Bashar al-Assad.

On Friday, the army seized the village of Mayer, north of Aleppo, and half the town of Ratyan with support from dozens of Russian air strikes.

Western nations have accused the Syrian government of sabotaging UN-backed peace talks that collapsed this week with its military offensive, and Washington has demanded Moscow halt its bombing campaign.

Top diplomats from countries trying to resolve the conflict are set to meet again next week after UN envoy Staffan de Mistura suspended the floundering Geneva negotiations until February 25.

More than 260,000 people have died in Syria’s conflict and more than half the population has been displaced.