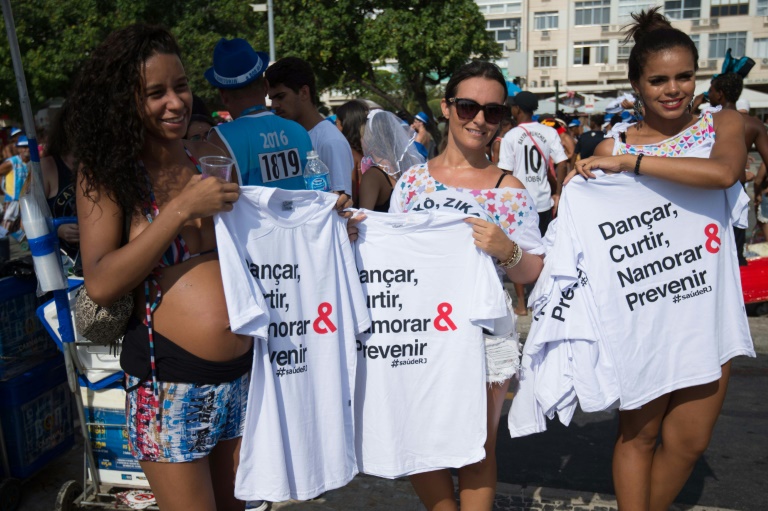 A massive, fleshy crowd of semi-naked people might seem like the Zika-transmitting mosquito’s paradise, but Rio Carnival goers Saturday said nothing — not even an international health emergency — can stop the party.

The peak weekend of Rio de Janeiro’s Carnival season got underway with an estimated one million people cramming into the city center for the Cordao da Bola Preta street party.

Dancing and heaving to a live samba band playing from the top of a truck, the crowd was a kaleidescope of pirates, Vikings, cats, clowns, rabbits, cavemen, pharaohs, babies, ladybird bugs — and a lot of skin.

With women in micro-shorts, men in barely-there mini skirts and a couple million bare arms waving to the music, a mosquito would have been spoiled for choice.

But despite international concern over the possible link between mosquito-borne Zika and deformed babies and also a rare, potentially deadly neurological disorder, fear of being bitten was as minimal as the clothing.

“I don’t think an area of the city like this is bad for mosquitoes, because there isn’t much vegetation,” she said, looking up at the tall buildings and broad sidewalks lined with palm trees.

Like others interviewed by AFP, she said she had not bothered with insect repellent. Vendors busily plied beer, icy water and costumes to the seething crowd but bug spray was nowhere to be seen.

Belief that Zika causes microcephaly — meaning abnormally small skulls — in children born to mothers infected while pregnant has prompted foreign governments to warn against traveling to much of Latin America.

The World Health Organization has declared an emergency and there are alarming, but still unconfirmed fears that the virus might also be transmittable through semen, blood and even saliva.

At the Zika epicenter, Brazil is simultaneously fighting mosquitoes and insisting that tourists face no danger at the Carnival or when they come to Rio in six months for the Summer Olympics.

Rio authorities say they are eradicating stagnant water where mosquitoes breed, fumigating Olympic stadiums, and are advising athletes and fans to wear long-sleeved clothing, close their windows and apply repellant.

But at the street party in central Rio — just one of scores taking place across the city Saturday — Luiz Marinho, 51, said the anti-mosquito war does not extend to less glamorous neighborhoods.

“Here in the center the mayor does everything necessary. It’s perfect. There’s no water around here, there’s no garbage. There’ll be garbage after this party, but it’s asphalt and they’ll just hose the place clean,” said Marinho, who works at a public hospital and was wearing a polka-dot sleeveless vest.

In the favelas, where Rio’s working poor live in tightly packed streets with few public services, “we have the real mosquito breeding sites,” he said. “We have water lying around and we don’t even have basic sanitation.”

“You won’t get stung here,” his wife Valeria Marinho, 43, in a polka dot miniskirt, said.

“Maybe someone here has a swimming pool — they might have mosquitoes,” her husband added.

– Kiss your worries away –

Every year Carnival gives Brazilians a chance to let their hair down. This year, with Zika, a deep recession and a grim corruption scandal, the need to party is even keener.

Despite the flow of alcohol, the heat and densely packed crowd, the huge Bola Preta party was remarkably good natured, with Brazilian television reporting only a handful of scuffles or attempts at theft. When one man was arrested after being chased by police, the officers were applauded by the crowd.

When the cortege of trucks carrying the live band, massive sound system and a gyrating group of dancers passed, the crowd went into a dance frenzy, hopping and wiggling in unison. The big trucks themselves began to shake in rhythm to the beat.

The good vibes left no room for worries, said Felipe Nazareth, a 22-year-old bank employee who was in a miniskirt with fishnet stockings and nothing else.

Asked if he had put on anti-mosquito repellant, he shook his head, laughing, and quoted a famous song about the miracle of samba with a line that goes: “He who protects me never sleeps.”