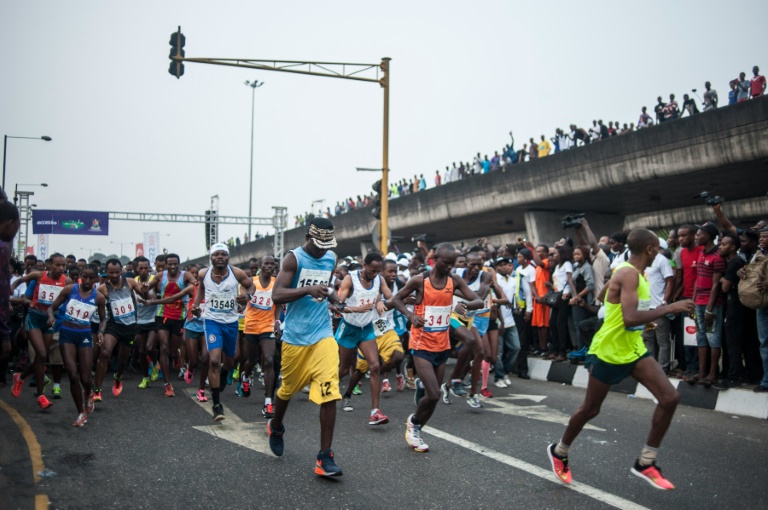 The infamously congested, concrete jungle of Lagos is far from a runners’ paradise, but with the launch of a new annual marathon on Saturday organisers hope to show that the city’s bad reputation is undeserved.

Over 20,000 participants turned out before dawn on a typically muggy morning in Lagos to compete in the biggest marathon the city has seen in thirty years.

The streets of sub-Saharan Africa’s biggest metropolis, usually clogged with cars, battered mini busses and whizzing okadas — motorbike taxis — were cleared for the event and patrolled by lines of armed police and soldiers.

Runners, some barefoot and others decked out head to toe in candy-coloured athletic gear, braved the haze, taking advantage of the rare opportunity to run on a smooth road with air free of exhaust fumes.

“It’s kind of hectic to stay in Lagos, but people make it work,” Lolade McJohnson, a 33-year-old lawyer cheering on runners, said to AFP.

“After this, we’ll have more people interested in running, maybe now we’ll even have a Nigerian champion.”

Unlike in Kenya and Ethiopia, two countries whose runners have dominated marathons for years, or in marathon-crazed South Africa, Nigeria has yet to develop a long distance running culture.

For some, it’s a casualty of years of chronic mismanagement of lucrative oil funds that has left Africa’s biggest economy without basic infrastructure, let along quality sports programs.

“In the 70’s and 80’s there was a strong culture of running, all that died,” Lagos City Marathon spokesman Olukayode Thomas said to AFP.

“But that is a culture we’re trying to revive.”

With Nigeria, Africa’s biggest oil producer, taking a massive hit from the low price of crude and battling an almost seven-year Boko Haram Islamic insurgency, Thomas said events like the marathon show it’s not only doom and gloom for the country.

“It’s not just about Boko Haram, there are a lot of positives in Nigeria.”

Thousands of people turned out to encourage the runners along the 42 kilometre stretch of road, with gardeners hosing down panting contestants and a mini-marching band composed of a trumpeter and two drummers adding an impromptu soundtrack to the event.

Kenyan Abraham Kipton won the marathon and the $50,000 prize with a time of 2:16.21, crossing the finish line with his arms raised in victory before collapsing on the ground just after the finish line.

Though happy for his win, he had to acknowledge Lagos’s oppressive heat.

“It is my first time running in very high humidity but I thank God for this day,” Kipton said to AFP.

Adeyemi Kazeem, one of the first Nigerian finishers, said that despite not placing in the top three he was proud of his performance.

“I feel good, I can inspire more people to run in Nigeria,” he said.

Still in its infancy, the race suffered a few hitches.

One runner said that by the time he reached the refreshment station there was no bottles of water left and was forced to pull out of the race at the 30 kilometre mark.

But with the next Lagos marathon already pencilled in for February next year, Thomas insists these are just hiccups in the grand scheme of things.

“We were facing many fears before the race — security, traffic — but so far there’s not been any issues,” Thomas said, “it can only get better.”