Home Sports Any guesses for who is the costliest player in IPL 2016? 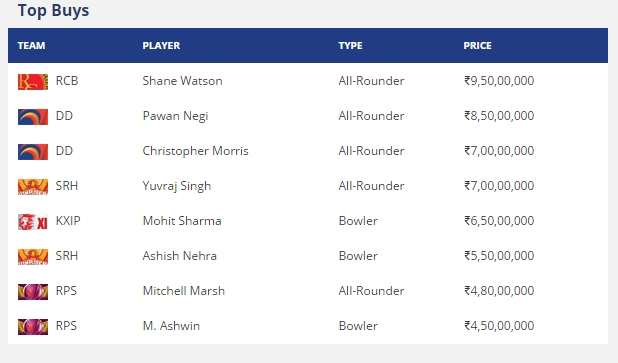 The biggest surprise in this year’s IPL auction was the uncapped Pawan Negi. He became the costliest player in the IPL 2016 so far when he was bought for a sum of Rs 8.5 crores. He was bought by The Delhi Daredevils.

Pawan Negi has also been included in India World T20 squad. Negi is well known for his fireworks when it comes to batting. He also has an uncanny left arm orthodox spin. Negi had a base price of 30 lakh.

Delhi Daredevils had to go head on with Pune Supergiants. The bidding became quite exciting as it seemed to never end. Finally at the end Stephen Fleming who is also the coach of the Pune franchise finally gave up which allowed Delhi to bag Negi.

Another surprise during the auction was South Africa’s Chris Morris. Morris had a base price of 50 lakh; for Morris the bidding started between Mumbai and Kolkata, but in the end Delhi Daredevils came in and took the player at 7 crores.

Another player who went for a good amount was Mohit Sharma. The former Chennai Super Kings player  who had a base price of RS 1.5 crore and was bought for Rs 6.5 crore by Kings XI Punjab.

Another interesting bid was for Ashish Nehra  between Kings XI Punjab and Sunrisers Hyderabad.

Another surprise came in the form Dale Steyn because he was bought by Gujarat Lions for Rs 2.3 crore