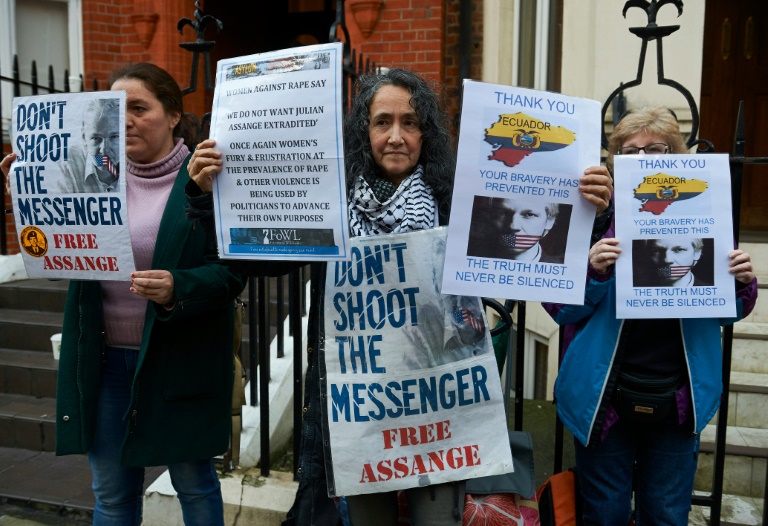 WikiLeaks founder Julian Assange could walk out of the Ecuadoran embassy in London after more than three years on Friday, when a UN panel will rule whether he has been illegally held.

The UN Working Group on Arbitrary Detention (UNWGAD) is expected to declare that his time stuck in a cramped embassy office amounts to arbitrary detention, according to the Swedish foreign ministry and Assange’s lawyers.

Though the opinion is non-binding, the 44-year-old said he expects the panel’s decision to change the game after three and a half years in confinement.

“Should the UN announce tomorrow that I have lost my case against the United Kingdom and Sweden I shall exit the embassy at noon on Friday to accept arrest by British police,” he said in a statement.

If the group decides in his favour, however, Assange said he expects “the immediate return [of] my passport and the termination of further attempts to arrest me”.

The Australian national has been holed up in the embassy since June 2012 to avoid a European arrest warrant and extradition to Sweden over a rape allegation, which he denies.

He fears that, if detained, he could be extradited to the US be tried over Wikileaks’ publication of hundreds of thousands of classified documents.

Swedish prosecutors have said that the UN panel’s opinion “has no formal significance for the ongoing investigation under Swedish law.”

The decision is expected at 0800 GMT Friday, and WikiLeaks announced it will hold a press conference at 1200 GMT in a venue two kilometres (1.2 miles) north of the embassy.

“Julian and his lawyers will be present to discuss the decision and what its ramifications are for WikiLeaks, Sweden and the UK,” a statement from Wikileaks said.

Sympathisers have called for protesters to gather outside the Ecuadorean embassy to support Assange if he leaves.

A hero to some and a dangerous egocentric to detractors, the computer programmer and hacker founded anti-secrecy group WikiLeaks in 2006.

The group’s activities — including the release of 500,000 secret military files on the wars in Afghanistan and Iraq and 250,000 diplomatic cables — have infuriated the United States.

Ecuador granted Assange asylum in August 2012, and on Thursday President Rafael Correa told a news conference the expected UN decision “shows we were right, after so many years”.

Correa asked whether compensation could be paid for “the harm that has been done to Julian Assange and to Ecuador”, saying security at the embassy had been expensive.

Britain too spent millions of pounds maintaining a 24-hour guard outside the embassy to immediately arrest Assange if he set foot on British soil.

The guard was withdrawn last year, but police said they would strengthen a “covert plan” to prevent Assange slipping away.

The decision by the UN panel follows a complaint by WikiLeaks against Sweden and Britain in September 2014 in which they claimed Assange’s confinement in the embassy was unlawful and that he was a “political refugee”.

“This is an application framed by political events, but at its heart, it is about a person who has been deprived of his liberty in an arbitrary manner for an unacceptable length of time,” their submission read.

Though the panel’s rulings are not legally binding, the Justice for Assange support group said they have influenced the release of prominent figures including Myanmar’s Aung San Suu Kyi and former Maldives president Mohamed Nasheed.

The British government has denied that Assange was ever arbitrarily detained and said he was rather “voluntarily avoiding lawful arrest”.

“An allegation of rape is still outstanding and a European Arrest Warrant in place, so the UK continues to have a legal obligation to extradite Mr Assange to Sweden,” a spokesman said.