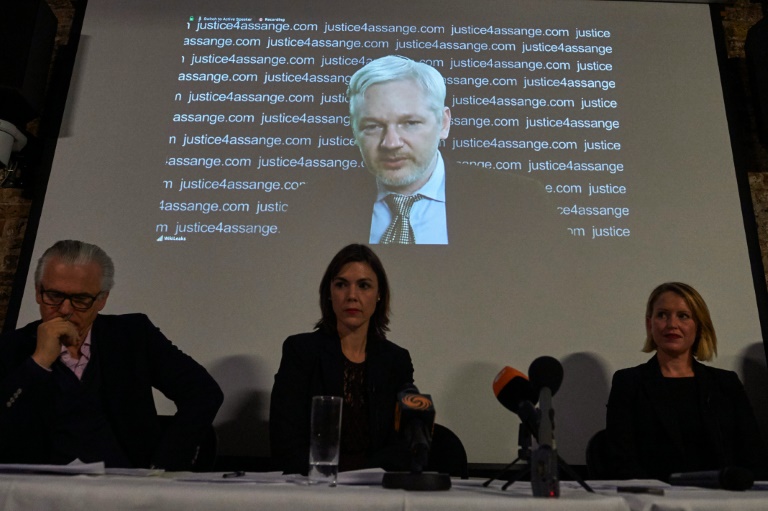 WikiLeaks founder Julian Assange Friday urged Britain and Sweden to let him walk free from Ecuador’s embassy in London after a UN panel found that the anti-secrecy campaigner was “arbitrarily detained.”

Addressing a press conference via video link from the embassy, where he sought refuge in June 2012 and was later granted asylum, Assange hailed a “significant victory which has brought a smile to my face”.

“It is now the task of the states of Sweden and the United Kingdom as a whole to implement the verdict,” the 44-year-old Australian told a packed room of journalists in the British capital.

His comments came after a UN panel said Assange’s detention should end and that he should be able to claim compensation from Britain and Sweden, where he faces questioning over a rape allegation.

Assange walked into the embassy in June 2012 to avoid the threat of arrest and extradition to Sweden.

He has lived there ever since in a small office room with a bed, computer, sun lamp, treadmill and access to a small balcony.

In a statement, the panel said it had adopted an opinion “in which it considered that Mr Julian Assange was arbitrarily detained by the governments of Sweden and the United Kingdom of Great Britain and Northern Ireland.”

It added: “The working group also considered that the detention should be brought to an end and that Mr Assange should be afforded the right to compensation.”

Britain and Sweden sharply condemned the panel’s findings and said they would change nothing.

“This is frankly a ridiculous finding by the working group and we reject it,” the foreign secretary added.

Sweden’s foreign ministry said that it “does not agree” with the assessment.

“Mr Assange is free to leave the embassy at any point and Swedish authorities have no control over his decision to stay at the embassy,” the ministry added.

Only three of the five members of the UN panel supported the opinion — one recused herself because she is Australian, like Assange, and another member disagreed.

“It is very unusual that there is a decision not based on consensus,” said Christophe Peschoux, the working group’s secretary, at a briefing in Geneva.

Swedish authorities want to speak to Assange about a rape allegation whose statute of limitations does not expire until 2020.

Elizabeth Fritz, the lawyer for the woman who has accused Assange of rape, said the UN ruling was offensive to her client.

“That a man who is wanted on an arrest warrant for rape should be awarded compensation for intentionally hiding from the judicial system for more than five years is offensive to my client and to the human rights of all victims of crime,” she said.

Swedish judicial authorities said last month that Ecuador had refused its request to let a Swedish prosecutor question Assange because Quito wanted an Ecuadoran prosecutor to do the questioning.

Assange fears that if he went to Sweden, he could then be sent to the US and face prison.

Wikileaks’ activities — including the release of 500,000 secret military files on the wars in Afghanistan and Iraq and 250,000 diplomatic cables — have infuriated the US.

A hero to supporters and a dangerous egocentric to detractors, the computer programmer and hacker, whose celebrity fans include fashion designer Vivienne Westwood and singer Lady Gaga, founded WikiLeaks in 2006.

He has featured in two movies in recent years, including one, “The Fifth Estate,” in which he was portrayed by actor Benedict Cumberbatch.

Britain spent over Â£10 million (12 million euros, $15 million) maintaining a 24-hour guard outside the embassy to immediately arrest Assange if he set foot on British soil, but withdrew it last year.

The Assange case has polarised opinion in Britain and there were many criticisms of his conduct Friday — some serious, others more light-hearted.

The Guardian newspaper, which has in the past worked with WikiLeaks to publish secret documents, used an editorial to condemn the latest developments as “a publicity stunt.”

“It is possible to sympathise with his circumstances and to applaud his role in the WikiLeaks revelations that exposed embarrassing and sometimes illegal US activity… without accepting his right to evade prosecutors’ questions,” it added.

On Twitter, some users adopted the hashtag #ArbitrarilyDetained to mock Assange, while supporters tweeted under #sunshine4assange.

“Husbands all over Britain can tell their wives they’ve been #ArbitrarilyDetained at the pub tonight,” wrote one user, Chris Allies.