Home World US jobless rate falls to 4.9% but hiring slowed in January 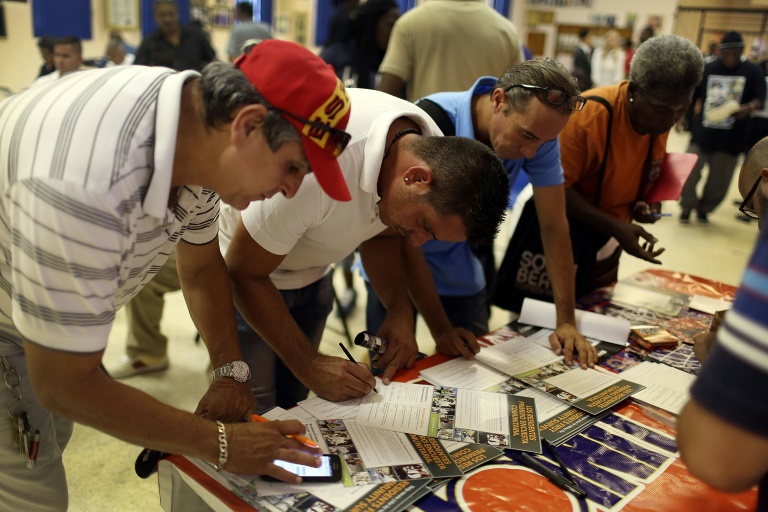 The US unemployment rate eased to an eight-year low of 4.9 percent but hiring slowed in January, fresh evidence of the US economy hitting a soft patch.

Coming on the tail of a second very strong year for hiring — 2.7 million new positions were generated in all of 2015 — the one-month downturn did not by itself signal a new trend.

But it came amid fresh worries that the global economic slowdown, and turmoil in financial markets, could drag the US economy with it.

There were some signs of modest strength, with the unemployment rate hitting its lowest level since February 2008, at the beginning of the US recession.

In addition, growth in workers’ earnings, now closely watched as a sign of whether inflationary pressures might begin building, was slightly stronger. Average hourly earnings rose by 0.5 percent from December to $25.39, and were up 2.5 percent year-on-year.

But the total number of unemployed persons, at 7.8 million, was only slightly better from December.

And the number of long-term unemployed, and the number of people forced to work part-time because they cannot find full-time work — indicators of how much slack remains in the jobs market — were both little-changed.

Hiring continued to be strongest in the retail trade, the leisure and hospitality sector, and health care. But also showing strength were construction and manufacturing, the latter having slumped in recent months.

“Talk of recession in the (manufacturing) sector is overdone, though exporters clearly are struggling,” said Ian Shepherdson of Pantheon Macroeconomics.

The plunge in oil prices continued to hit the mining industry, with a net 7,000 jobs lost in the month.

Economists were hesitant to declare one-month’s hiring slowdown a trend.

“Today’s numbers are about momentum, so while 151,000 new jobs in January is below expectations and off pace from prior months, the data shows America’s recovery is continuing,” said Beth Ann Bovino, US chief economist at Standard & Poor’s Ratings Services.

“Amid all the global economic turmoil and domestic market gyrations, positive job growth, the drop in the unemployment rate to 4.9 percent, and the uptick in wages show the US is heading in the right direction,” she said.

Shepherdson said the seasonal effect on many of the numbers means “you cannot use these numbers in support of a broad economic slowdown story.”

The monthly data is more heavily in focus now as an indicator of what the Federal Reserve might do in its March policy meeting, after raising interest rates a quarter point in December but standing firm in January.

The rise in wages, if sustained in February data, would support another rate hike. But continued slow hiring could prod the Fed to wait for even more data on how the economy, and inflation, are moving.

“What this all means for the Fed is unclear,” said Shepherdson.

“But their obsession with wage inflation makes it very risky to assume they’ll focus only on the payroll ‘slowdown,'” he said, making the data on the jobs market in February even more important.

Markets though took the wage growth as supportive of a rate hike, at least sooner rather than later. The dollar strengthened about 0.4 percent to $1.1134 against the euro, and near-term Treasury bond yields rose.