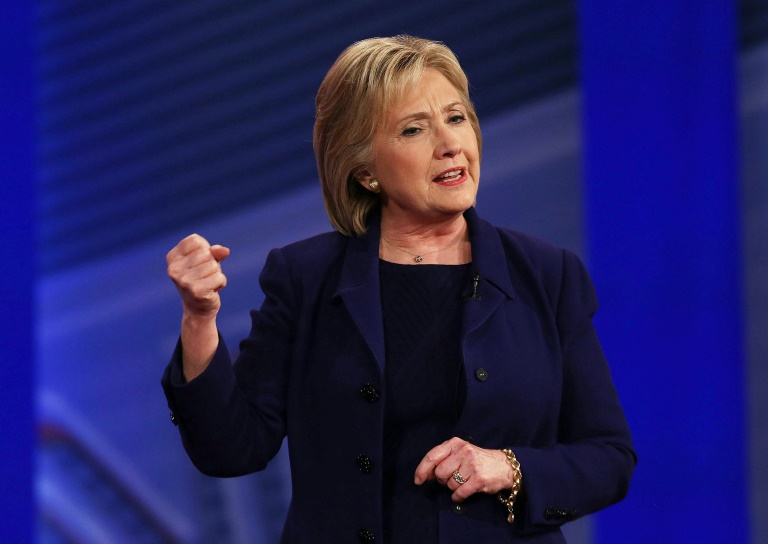 Democrats Hillary Clinton and Bernie Sanders face off Thursday in the first debate since their bruising Iowa clash that the former secretary of state won by a hair, as they gear for a battle royale in New Hampshire.

Republicans too were swarming the Granite State ahead of the crucial February 9 vote, with national frontrunner Donald Trump eager to reclaim the lead after he was beaten in Iowa by arch-conservative Senator Ted Cruz.

Sanders, an independent US senator from neighboring Vermont, is riding high in the polls — this week’s 7News tracking poll shows him ahead of Clinton by 22 percentage points.

And he came out of Iowa claiming moral victory, having drawn nearly even with his rival in the first vote of the 2016 presidential nominating contest.

Clinton clinched the narrowest victory in Iowa caucus history with 49.8 percent compared to 49.6 percent for Sanders, saving herself the embarrassment of reliving her bitter 2008 defeat to Barack Obama.

She is aiming to substantially cut into Sanders’s New Hampshire lead and regain some momentum going into friendlier territory later this month in Nevada and South Carolina.

Thursday night’s showdown will be their first without Democratic challenger Martin O’Malley, the former Maryland governor who exited the race after a poor showing in Iowa.

With just the two on stage, Clinton and Sanders will square off over their key differences on foreign policy, guns, health care and taxes.

A preview of sorts unspooled Wednesday at a town hall meeting in Derry, New Hampshire, where the two clashed over who will more faithfully carry the progressive torch.

Clinton insisted she is “a progressive who gets results,” as opposed to the more ideological “political revolution” espoused by Sanders, who identifies as a democratic socialist.

Sanders is calling for more dramatic political upheaval: a shift to a single-payer health care system, breaking up the big banks, and free college education for everyone.

Clinton also acknowledged she faces an uphill battle in winning over the youth vote, which polls show is breaking heavily for Sanders whose poverty-busting agenda has inspired a passionate following among young voters.

“I accept the fact that I have work to do to convey what I stand for, what I’ve accomplished, what I want to do for young people in our country,” she said.

Sanders insists he is the candidate more committed to reining in billionaires’ influence on the US political system.

“You’re looking at the guy who’s not just talking the talk when it comes to campaign finance — I am walking the walk,” Sanders posted on Twitter Thursday.

On the Republican side, polls put Trump firmly ahead in New Hampshire, but analysts warn that anything less than victory Tuesday will further damage his campaign message that he is a winner.

Trump is expected this week to step up sharp attacks on Cruz and Rubio as the New Hampshire primary nears.

He has already accused Cruz of stealing victory in Iowa by sending out a misleading statement saying fellow candidate Ben Carson was quitting the race, something Carson vehemently denied.

“Ted Cruz should be immediately disqualified in Iowa, with each candidate moving up one notch,” Trump tweeted in the pre-dawn hours Thursday.

Cruz, seeking to capitalize on his momentum, dismissed Trump’s rants as “yet another ‘Trumpertantrum.'”

Meanwhile Rubio is claiming his own “Marco-mentum” in the race. His team announced several new congressional endorsements in recent days, with Rubio projecting a sense of confidence and mainstream electability on the campaign trail.

Rubio now claims support from six US senators including South Carolina’s Tim Scott. Cruz has no endorsements yet from fellow senators.