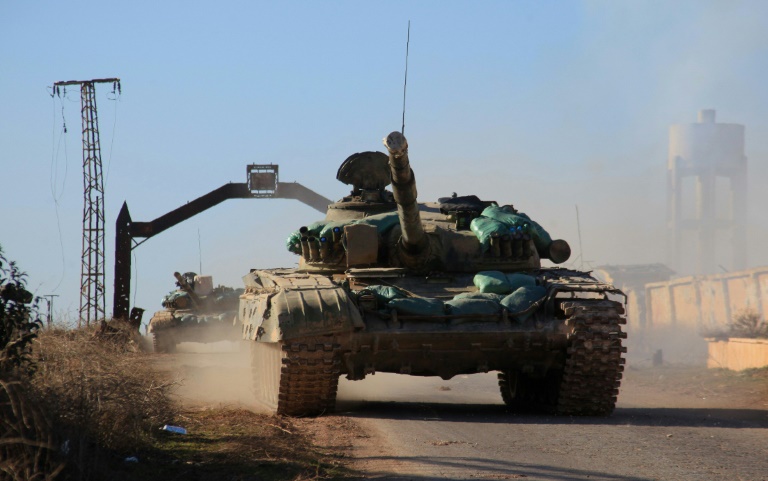 The US and France have accused President Bashar al-Assad’s regime of undermining talks to end Syria’s civil war, which were suspended hours before donors were due to meet Thursday to raise aid for the conflict-torn country.

The UN paused the fruitless peace negotiations as the Syrian government said it had dealt a major blow to the opposition by cutting a key supply route to the second city of Aleppo with the help of Russian air strikes.

The talks had been tipped as the most important push so far to end Syria’s bloody five-year conflict, which has killed more than 260,000 people and forced half the country’s population from its homes.

But they stalled before any progress had been made, with the main opposition umbrella group, the High Negotiations Committee (HNC), saying it would not return to Geneva until the regime agreed to end bombardments, allow aid into besieged cities and release thousands of prisoners.

UN special envoy Staffan de Mistura said the talks would resume on February 25, insisting this was “not the end or the failure of the talks” and calling on all players to work harder to make them a success.

But French Foreign Minister Laurent Fabius accused Damascus and Russia of “torpedoing the peace efforts” with their offensive, which US Secretary of State John Kerry said proved the Syrian government was not serious about the negotiations.

“The continued assault by Syrian regime forces — enabled by Russian air strikes — against opposition-held areas… have clearly signalled the intention to seek a military solution rather than enable a political one,” Kerry said in a statement.

Syrian troops, helped by days of Russian air sorties, on Wednesday cut the last supply route linking rebels in Syria’s second city of Aleppo to the Turkish border in a major blow to the opposition.

It is one of several regime offensives since Moscow threw its military might behind Assad in September, and Russian Foreign Minister Sergei Lavrov said Wednesday he saw no reason for the air strikes to stop until the “terrorists” are defeated.

The suspension of the talks came as donors were due to gather in London with the aim of raising $9 billion in aid for Syria and to help its neighbours cope with millions of people that have taken refuge on their soil.

Although Russia will not be taking part in the conference, Fabius said world leaders would use it to stage “in-depth consultations” on Moscow and Damascus’s role in the crisis.

Ahead of the start, Britain pledged Â£1.2 billion (1.6 million euros, $1.74 billion) in aid, to be spent between 2016 and 2020, to address what Prime Minister David Cameron called “the world’s biggest humanitarian crisis”.

Some 4.6 million Syrians have fled to nearby countries — Jordan, Lebanon, Turkey, Iraq and Egypt — while hundreds of thousands have journeyed to Europe in the region’s biggest migration crisis since World War II.

“With hundreds of thousands of people risking their lives crossing the Aegean or the Balkans, now is the time to take a new approach to the humanitarian disaster in Syria,” Cameron said.

Aid from the conference will be targeted at helping the economies of Syria’s neighbours, creating jobs for refugees and citizens of their host countries, according to the release.

It will also go towards food, shelter, medical care and rebuilding health facilities in Syria itself.

Organisers have already agreed that participants should at least “double” their contributions from 2015, when they raised $3.3 billion.

De Mistura’s brief at the Geneva discussions was to coax both sides into six months of indirect “proximity talks” envisioned under a November roadmap, but problems plagued his efforts from the outset.

The HNC arrived several days late — and reluctantly — insisting on immediate steps to allow aid to get through to besieged cities, a halt to the bombardment of civilians and the release of thousands of prisoners.

Riad Hijab, HNC chief coordinator, said late Wednesday the group “will not return until the humanitarian demands are met or (we) see something on the ground”.

“The whole world sees who is making the negotiations fail, who is bombing civilians and starving people to death,” Hijab told reporters, adding the Russian-backed advances showed the government was not genuinely interested in peace talks.

The Syrian government delegation in Geneva, meanwhile, complained that the Saudi-backed HNC was disorganised, had not named its negotiators and contained individuals it considered “terrorists”.

One such figure is Mohammed Alloush, a leading member of Islamist rebel group the Army of Islam and nominally the HNC’s chief negotiator, who arrived in Geneva late on Monday.

Bashar al-Jaafari, chief government negotiator, blamed the suspension on opposition “preconditions” and said de Mistura announced the break only because the HNC was about to leave.