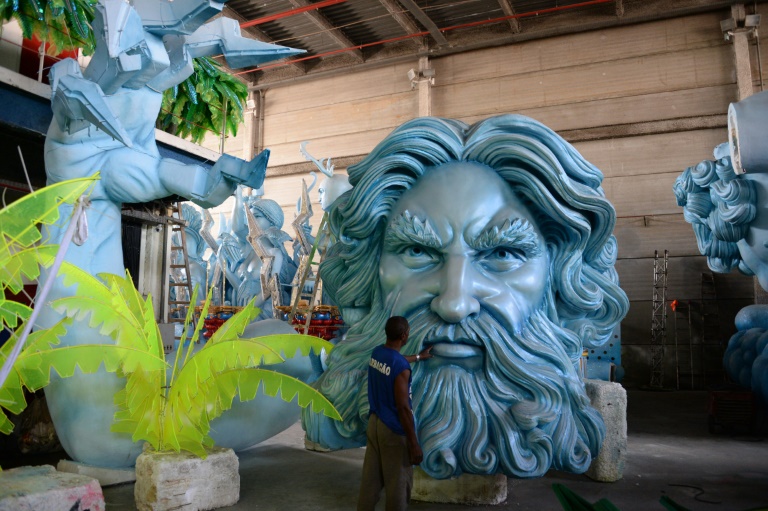 It may be Olympic year in Rio de Janeiro, but economic crisis means there’s not much gold for cash-strapped organizers of a Games-themed parade at this week’s carnival.

The Olympics, starting August 5, have been hit with a steep cut in the operating budget, which was drawn up before Brazil’s slide into its worst recession since the 1930s. Penny pinching also extends to Rio’s carnival, an annual contest between different samba schools which starts officially on Friday.

The Uniao da Ilha samba school, which has chosen an Olympics theme for its dancers and floats competing in the Sambadrome stadium, says things are far from the carnival’s usual image of excess.

Sponsors have gone missing and the plunge in value of the national currency, the real, has made imported materials for the costumes — 90 percent of which come from China — wildly expensive.

The Uniao da Ilha’s entry features dancers clad in ancient Greek-style costumes and “tells the story of how Rio is preparing” for the Games, director Paulo Menezes said. “The gods come down from Mount Olympus to see the city and then decide to stay, enchanted.”

“The situation has been difficult for four or five years, but this year was worse because everyone is in crisis and prices rise,” de Souza told AFP.

“We spend 15 million reais ($3.8 million) for each parade and only half of that has financing. With the recession it has got even worse,” he said, complaining that neither the mayor’s office nor the Olympic organizing committee contributed anything, despite the samba school promoting the Games.

“We began working in June on the understanding that we’d get financing, but it never arrived.”

Another letdown was the decision by troubled state oil giant Petrobras, which faces a huge drop in oil prices and a crippling corruption scandal, to start giving out its sponsorship in installments.

Even the wealthier samba schools with big backers — often someone in Rio’s underground betting industry — are in difficulty.

Neguinho, singer for the famous Beija Flor samba school, told O Globo newspaper that they’d been “negotiating” over salaries for participants just to be able to handle the expenses.

The carnival is embedded in Rio’s calendar, but de Souza said samba schools are starting to consider the unthinkable: a strike.

“There’s starting to be a consensus on the need to stop taking part in the parades in the future” if the authorities don’t help more with funding, he said.

“City Hall, the hotels, the businesses, they all stuff their pockets during carnival. And us? Nothing!”

De Souza suggested that tourists to Rio pay a $10 tax that would go to supporting the carnival.