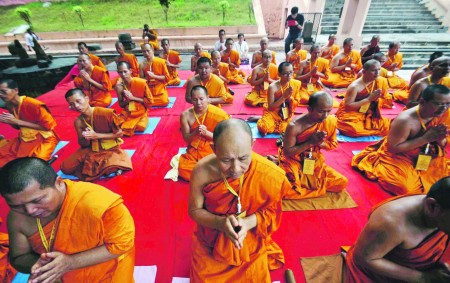 In a move which could boost Buddhist tourism in the country, India is planning to liberalise visa for the 10-member ASEAN (Association of South East Asian Nations). The move has been considered because of the fact that there are links of “shared heritage”, which includes spread of Buddhism across parts of South East Asia from India.

“The spread of Buddhism from India is attributed to Emperor Ashoka, who sent Buddhist emissaries to Sri Lanka, Myanmar, Thailand, Cambodia and Vietnam. Indian mythology and folklore finds reflection here,” Vice President Hamid Ansari said in his address at the Chulalongkom University in Bangkok.

In modern times, many Indian immigrated to South East Asia in the 18th and 19th centuries. Their descendants today constitute a vibrant community of people of Indian origin, contributing actively to their respective countries of adoption. “In consideration of these links, India is considering the feasibility of liberalizing our visa regime for ASEAN countries to facilitate Buddhist tourist arrivals,” Ansari said.

The vice-president also referred to the re-establishment of the Nalanda University, which has strong support from several ASEAN members, and said efforts are on to set up a similar world-class varsity. “Nalanda was once a world-renowned knowledge hub where scholars from around the world, including South East Asia and India, exchanged knowledge and ideas. Now we are working to create a similar world call university in the 21st century, with the support of our East Asian partners and have offered scholarships to students from CLMV countries (Cambodia, Laos, Myanmar and Vietnam) to study there,” added Ansari.

(With Inputs from PTI)