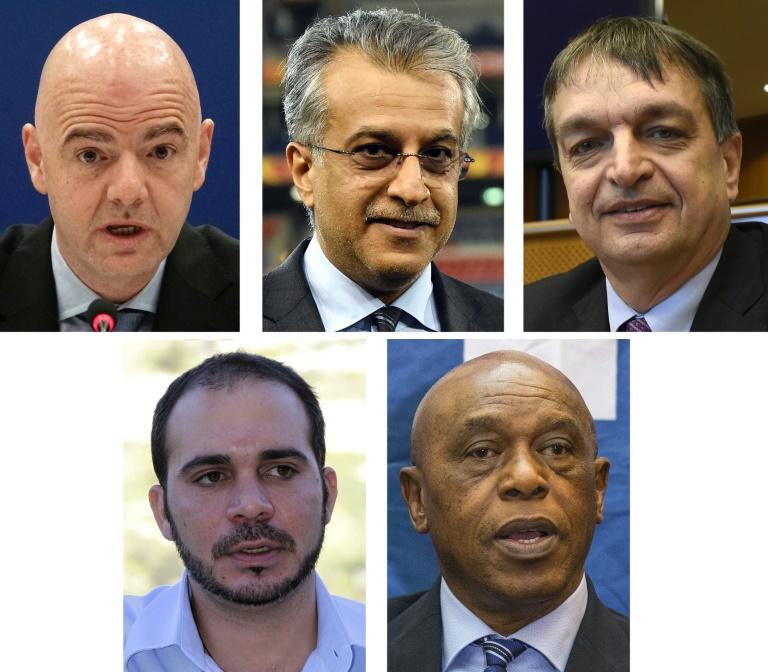 The battle for the FIFA presidency has turned into a gruelling round-the-globe marathon for the five candidates but observers say they are avoiding the real problems facing the scandal-infected world football body.

With Asian Football Confederation president Sheikh Salman Bin Ebrahim Al-Khalifa and UEFA general secretary Gianni Infantino leading the pack, many will descend on an African congress in Rwanda on Friday and quickly move on to Miami for a meeting of north and central American soccer nations.

There will be more air miles to cover in the race to succeed the disgraced Sepp Blatter at a February 26 election in Zurich.

There are no opinion polls, but with the 79-year-old Blatter forced into exile, the result is uncertain, experts said.

All have released manifestos calling for a cleanup at FIFA, reeling from the arrest of top executive members on corruption charges in the United States. But the detail is lacking.

“The candidates cannot go too far otherwise they will alienate key voters like in an American election,” said Jean-Loup Chappelet, a specialist on sports organisations at the University of Lausanne in Switzerland.

“Most are continuing the promises of riches to national members rather than addressing the true, and desperate, challenges that currently FIFA faces for survival,” Patrick Nally, a pioneer in international sports marketing, told AFP of the campaign.

“They are all playing lip service to the membership and not wanting to be in any way controversial. In effect it is a very dull and very disappointing presidential election with no charismatic leader in sight.”

Most of the manifestos mirror recommendations made by FIFA’s own reform committee which calls for greater transparency.

“However, there is a difference between highlighting a problem and delivering the solution to the problem.

“This is particularly the case in sport, especially in the highly political world of football,” said Sean Cottrell, chief executive of the lawinsport.com website and a lecturer on sports business in London.

“Therefore only when someone is elected and the FIFA congress has passed the recommendations, subject to any changes, we will know if they have addressed the real problems.”

Football is the biggest sport and FIFA the most powerful sporting federation but it has been dragged through the mud over the past year by corruption scandals.

US authorities have charged 39 individuals and two companies over more than $200 million in bribes for football marketing and broadcasting deals.

Swiss prosecutors are looking into FIFA’s management and the way the 2018 and 2022 World Cups were awarded.

Blatter and his former crown prince UEFA president Michel Platini have been banned from football for eight years for abuse of power in a $2 million dollar payment.

Football is struggling to get over US attorney general Loretta Lynch’s damning comment that corruption is “deeply entrenched” in the sport.

Sheikh Salman has proposed splitting FIFA’s football organisation and business arms. Infantino has also called for a clear split between FIFA’s sport-political business and its day-to-day management of deals and business.

Nearly all the candidates say FIFA should give more of its huge revenues back to the 209 member associations.

Infantino has also said the World Cup should be increased from 32 countries to 40.

“Increasing the number of teams is an old demand from federations which could reduce the number of bid countries because you would need more stadiums or several countries to hold it,” said Chappelet.

Nally said the weight of the Asian and African confederations, which between them have the 105 votes needed to win, had swayed the campaign with the presidential rivals promising more money for member associations.

He said real reforms would be forced from outside FIFA, by sponsors. “Unfortunately none of the candidates are addressing the real problems and answering the right questions.”