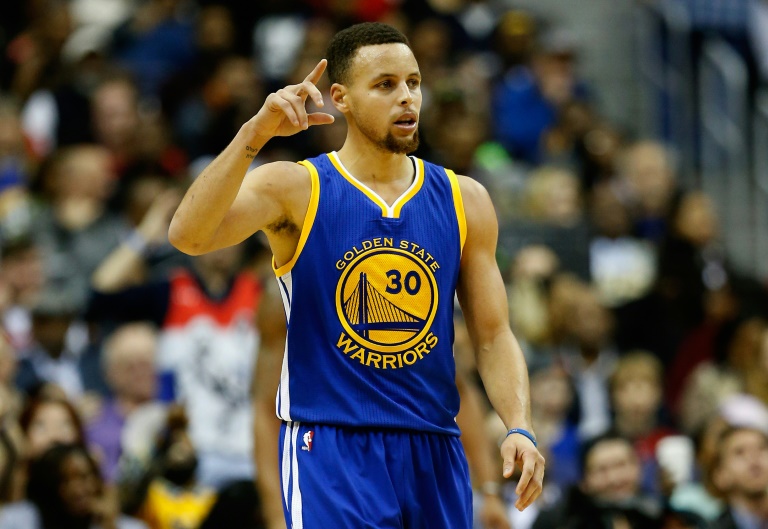 Reigning NBA Most Valuable Player Curry on Wednesday scored 25 points in the first quarter as the Warriors improved to 45-4 with their eighth consecutive victory.

Curry went 11-of-16 from beyond the arc, finishing one 3-pointer shy of matching the one-game NBA record of 12 3-pointers shared by Los Angeles Lakers guard Kobe Bryant and former NBA standout Donyell Marshall.

“I missed one too many,” Curry joked. “At the end of the game, yeah, I knew I was within reach. I was kind of searching, but not trying to force with where the game was. You can’t mess around with the basketball gods trying to chase a record if the game doesn’t call for it.”

Curry went 13-for-14 from the floor in the first half, making eight 3-pointers in producing 36 points to give Golden State a 74-60 lead.

The Wizards rallied within 81-79 before Curry helped the Warriors put down the threat.

Curry’s fellow NBA All-Star guard John Wall led Washington with a season-high 41 points and added 10 assists but the Wizards fell to 21-26 with their seventh loss in nine games.

“He made some unbelievable shots,” Wall said of Curry.

Curry, who finished 19 of 28 from the field, made his first six shots, including five 3-pointers, inside the opening seven minutes.

“To start off like I did was fun,” Curry said.

Warriors coach Steve Kerr compared the attention Curry gets to that received by his former NBA teammate Michael Jordan during their time together with the 1990s NBA champion Chicago Bulls.

“There are a lot of similarities, I think,” Kerr said. “Obviously with Michael drawing so much attention everywhere we went. I think today things are bigger in a lot of ways with social media and so many different media outlets. And Steph is getting a lot of notoriety, obviously, and drawing fans and media everywhere we go.”

Kerr jokingly took the blame for Curry missing out on a 12th 3-pointer, saying, “My fault. Should’ve called more plays for him.”

The Wizards were guided by interim coach Don Newman as coach Randy Wittman was away from the team following his brother’s death.

Mike Scott and Tim Hardaway Jr each scored 13 points to lead six double-figure scorers for Atlanta in a 124-86 win at Philadelphia while the Boston Celtics nearly squandered a 24-point lead before beating visiting Detroit 102-95 for their seventh win in eight games.

LaMarcus Aldridge scored a season-high 36 points as San Antonio beat New Orleans 110-97. The Spurs improved to 27-0 at home this season, setting a record for the best home start ever by a Western Conference team, and extending their multi-season home win streak to 36 games.

Kevin Durant scored 37 points, including the game-winning 3-pointer with half a second remaining, in Oklahoma city’s 117-114 victory over visiting Orlando. Russell Westbrook added 24 points, 19 rebounds and 14 assists for the Thunder.