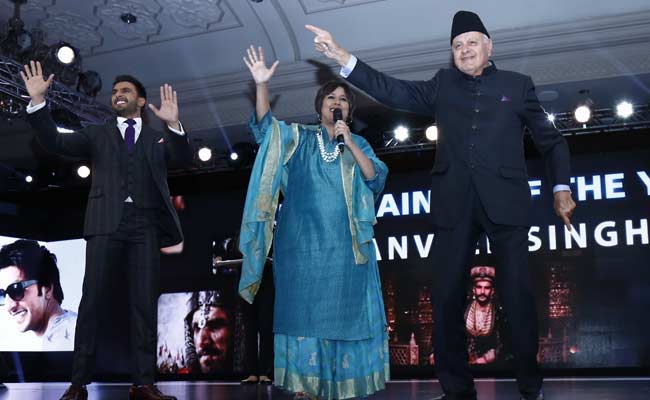 Ranveer Singh is always high on energy and his energy is so contagious that it can force anyone to shake a leg with him.

Similar thing happened to Veteran politician Farooq Abdullah, who broke into an impromptu gig with Bollywood actor Ranveer Singh on stage during an awards show.

As the song “Malhari” from the actor’s latest film “Bajirao Mastani” was played, Ranveer, who was onstage to receive the Entertainer of the Year Award, started dancing, with Abdullah matching steps with the actor.

The 78-year-old politician said that he wanted to become an actor.

Dr. Farooq Abdullah and @RanveerOfficial shake a leg on stage at the #NDTVIndian Of The Year 2015 https://t.co/PpGBWnrIRh

“If not a politician, I would have become an actor. And I love to do what they do and he (Ranveer) does. You were brilliant in ‘Bajirao Mastani’. Congratulations and all the best,” said Abdullah while presenting him the honour at the NDTV Indian of the Year award.

The “Ram Leela” star thanked the politician and jokingly added, “If you took to acting Mr Bachchan (Amitabh Bachchan) would be in a problem.”

To a question, Ranveer said he will never take part in a show like AIB Roast, which landed him in trouble last year.

“When you are so eager to entertain like I am, you get strange requests. So, I met a really wealthy man at a function recently. He said, ‘beta, you are great. Next time in Dubai, you come to my house and I will call all my guests. I want you to do ‘roast’ over there.’ I said you give me as many crores as you want, but I will not repeat the mistake,” he said.

Asked if he regrets being a part of the infamous show, Ranveer said, “No. Our intentions were good. We did that for charity. We introduced a new form of comedy in the gambit of entertainment and some people didn’t like it. So, it’s alright.