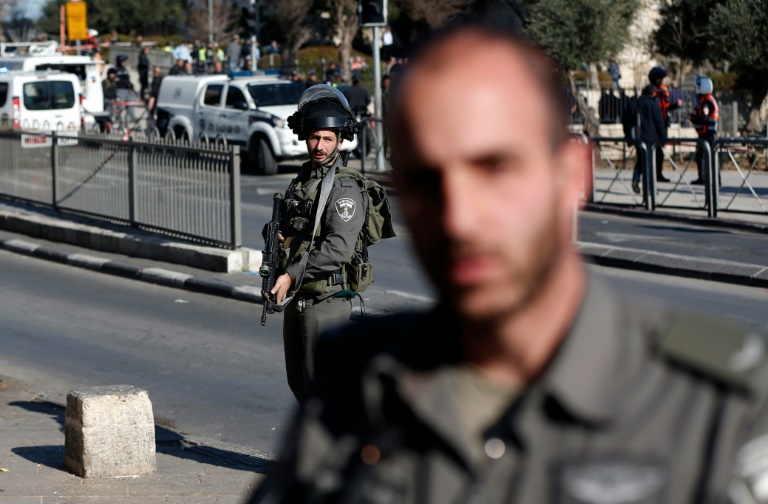 Three Palestinians armed with rifles, knives and explosives attacked Israeli police outside Jerusalem’s Old City on Wednesday, killing one officer and wounding another before being shot dead.

The attack outside the Old City’s Damascus Gate was part of a four-month wave of violence, but was among the most severe in Jerusalem, where many assaults have involved knives.

The policewoman who died had been shot in the head, medical officials said. According to Israeli authorities, the Palestinians were approached by border police for ID checks.

“As one was producing identification, his accomplices… started firing and stabbing and managed to wound two female officers,” a police statement said.

The surviving officer’s injuries were described as “moderate to serious”.

Officers opened fire and killed the attackers, police said, adding that they were from the northern West Bank.

Palestinian shopkeepers near the scene said they heard heavy gunfire.

Security forces locked down the area afterwards as crowds gathered to see what happened or to try to return to their homes in the Old City.

Damascus Gate is frequently used by Palestinians to enter the Old City, though sometimes by tourists as well.

Mayor Nir Barkat told reporters at the scene that their arrival with weapons in Jerusalem meant that a further clampdown on access routes from the adjoining West Bank should be examined.

“We need to tighten (restrictions) on the places from which the threat comes,” he said.

Israel occupied east Jerusalem, where Damascus Gate is located, in the 1967 Six-Day War and later annexed it in a move never recognised by the international community.

Major roads to and from the occupied West Bank pass through Israeli security checkpoints and a concrete wall runs through much of the area but the border is still porous in many places.

A wave of Palestinian knife, gun and car-ramming attacks erupted in October. Most of the attacks have been stabbings, although there have also been occasional shootings.

Wednesday’s attack was the bloodiest in Jerusalem since December 23, when at the Old City’s Jaffa Gate an Israeli was stabbed to death and another shot dead, seemingly from a stray police bullet as officers fired on and killed the two Palestinian assailants. A third Israeli was wounded in that stabbing.

Speaking about the latest violence, police spokeswoman Luba Samri said there was evidence the assailants were seeking to carry out a major attack.

“Found on the terrorists’ bodies were (Swedish-designed) Carl Gustav rifles, knives and explosive devices which were defused by bomb disposal experts,” she said.

Pictures released by police showed what appear to be two vintage-model submachine guns.

“The arms testify to a complex attack that was prevented by the forces who protected Jerusalem residents with their bodies,” Samri said in a statement.

Shortly after the attack, Israeli media were calling it “an escalation” in the more than four months of violence.

In the aftermath, a police helicopter hovered overhead and cleanup teams hosed away pools of blood.

The wave of violence has killed 26 Israelis, as well as an American and an Eritrean, according to an AFP count.

At the same time, 164 Palestinians have been killed by Israeli forces, most while carrying out attacks but others during clashes and demonstrations.

An Israeli teenager was lightly wounded on Saturday in a stabbing attack at the Damascus Gate allegedly carried out by two young Palestinians, who were arrested in a sweep of the area later.

Some analysts say Palestinian frustration with Israel’s occupation of the West Bank, the complete lack of progress in peace efforts and their own fractured leadership have helped feed the unrest.

Israel blames incitement by Palestinian leaders and media as a main cause of the violence.

Many of the attackers have been young people, including teenagers, who appear to have been acting on their own.

“Mostly we have seen shooting at settler cars in the West Bank but also attacks like today. The lethality of attacks has been increasing.”