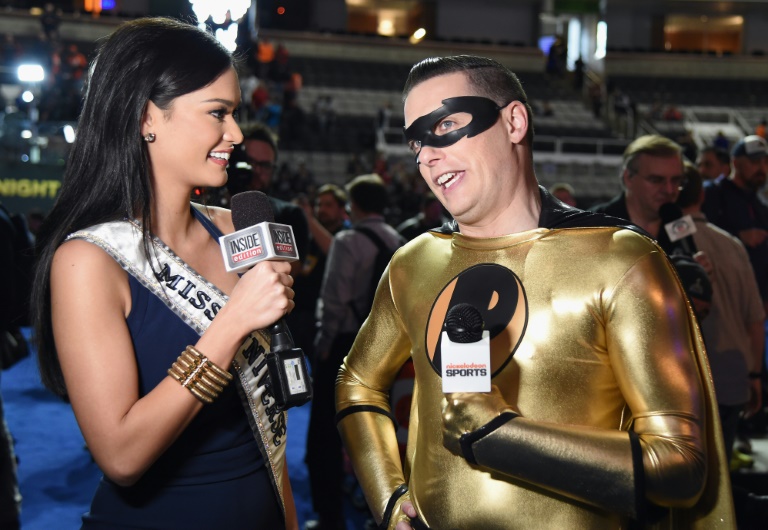 One journalist arrived clad in a sparkling gold superhero costume. Another fired off questions to athletes via a glove puppet.

Elsewhere in the cavernous indoor expanse of San Jose’s SAP Center — popular nickname: “The Shark Tank” — selfie stick-wielding reporters posed for snaps with Miss Universe, Pia Wurtzbach, hired by a US television entertainment show as an interviewer for the occasion.

“Go over there,” a television producer instructed a camera operator looking for the best vantage point to capture the occasion. “We kind of want the look of, like, you know, chaos,” the producer added.

The final countdown to the 50th edition of the Super Bowl, the biggest, brashest, loudest event in America’s sporting landscape, cranked into overdrive here.

Launching a week of festivities leading up to the showpiece was Monday’s opening night launch, two hours of organized chaos that saw several hundred journalists engaged in a tumultuous scrimmage for interviews and sound bites.

At the center of the scrum were the two men whose duel will quite possibly shape next weekend’s contest — Denver Broncos quarterback Peyton Manning and Carolina Panthers counterpart Cam Newton.

Manning, playing in his fourth — and possibly final — Super Bowl at the age of 39, has seen it all before.

“It’s fun for me,” Manning said when asked about the hoopla that surrounds the National Football League’s globally televised spectacular.

“Coach (Gary) Kubiak has encouraged us to soak it up — don’t just rush to Sunday, enjoy it. Sunday is why we’re here, of course, but you’re part of something pretty unique here so it’s important to soak it up.”

Fielding questions from journalists for around an hour, virtually no stone was left unturned.

Manning spoke at length about tactics, the qualities of Denver’s formidable defense and his relationship with younger brother Eli, the two-time Super Bowl-winning quarterback of the New York Giants.

He was also asked to wish his fans in China a Happy Lunar New Year, to disclose which actor he would most like to play him in a film of his life (“Maybe a young Robert Redford”) and to reveal his favorite song by Super Bowl half-time show artists Coldplay (“I don’t have one, but I’m looking forward to hearing them.”)

One reporter wanted to know his views on the Republican presidential nomination race in Iowa.

“I’ve met Donald Trump a couple of times,” Manning replied of the billionaire candidate in the running. “The times I’ve been around him he’s been nice to me.”

Asked who he was rooting for in the vote, he replied: “I’m rooting for the Denver Broncos … I’m a meathead football player.”

When Manning departed it was Newton’s turn to take to the podium.

The 26-year-old Carolina star has been the outstanding player of the season, and was happy to be told he was Manning’s pick as the Most Valuable Player of 2015.

“Anything the Sheriff has to say, you can probably ink it in gold,” Newton said with a smile, referring to Manning by his nickname.

Manning had also tipped Newton as the face of the NFL for the next eight to 10 years.

“It’s just a tremendous honor to be even mentioned and affiliated with the face of the league, but yet I think I have bigger fish to fry on Sunday, and then we’ll worry about the rest of the eight to 10 years after that.”

“The game preparation is not different at all, it’s just the media. It’s bigger than I expected. But it’s the Super Bowl — the most impactful game in all of sport,” he said.