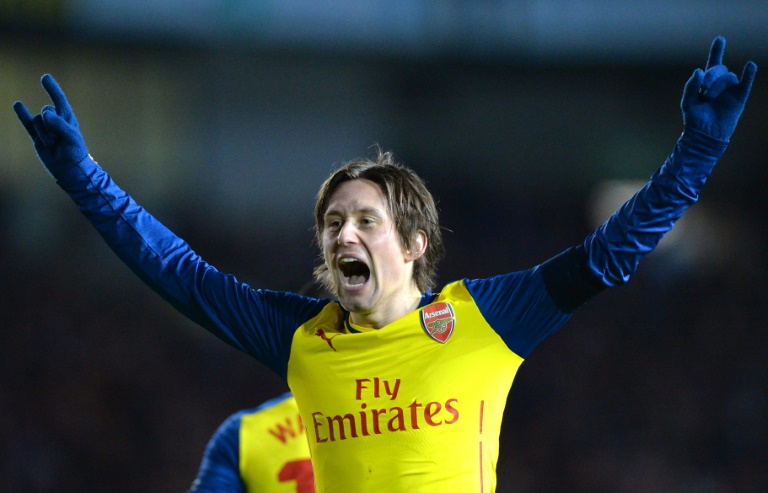 Arsene Wenger says Arsenal midfielder Tomas Rosicky is devastated by the latest injury setback which could see him ruled out for over a month.

Rosicky suffered a thigh problem just moments after coming off the bench for his first appearance of the season as a substitute in Saturday’s FA Cup fourth round win over Burnley.

A knee injury had kept the 36-year-old Czech Republic international out until that point and, with his contract due to expire at the end of the season, he fears he could have played his last game for the Gunners.

Rosicky, who was signed from Borussia Dortmund in 2006, has been beset with injuries ever since and has made just 158 starts in his almost 10-year stay at the Emirates Stadium.

“He’s devastated. Unbelievable,” Wenger said. “Nobody understands (how he got injured).

“He comes on, after three minutes he got the injury. I looked at him and thought ‘Tomas you do not run properly’ because he didn’t lift his legs and he lost some balls, I was amazed because he is top level technically.

“He told me after the game that he did it straight away, then I understood why that happened to him. He said ‘I stayed on because you couldn’t change anymore’. He warmed up well, for 20 minutes.”

A scan will reveal just how serious the new injury is and Wenger has his fingers crossed that Rosicky can return for the final weeks of the season.

“He’s such a good player but his career has been disrupted by so many injuries,” he added.

“Let’s hope we have good news, that it is not as bad as feared.”