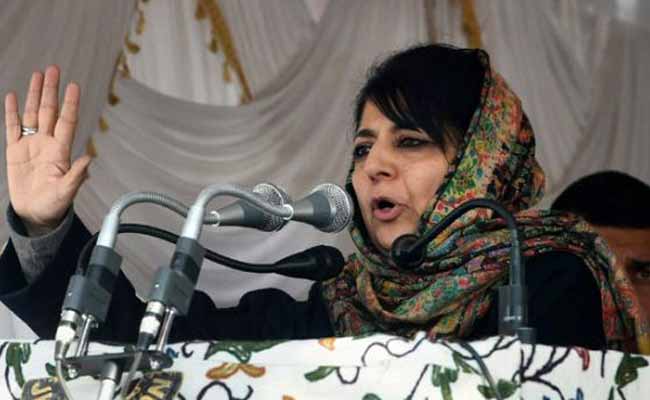 Jammu: With Political uncertainty following Jammu and Kashmir, PDP on Tuesday said it “cannot move forward” in forming government with BJP unless the Centre takes “tangible” CBMs to address the causes of alienation and works towards a lasting solution to the state’s problems.

PDP chief Mehbooba Mufti, who was invited by Governor N N Vohra for consultations on government formation, told him that she would like to see the Centre take “concrete steps” to address causes of the state’s “political uncertainty, economic disempowerment, development deficit, unfulfilled promises” before she makes any moves to form the government with BJP.

Vohra, who had stepped in to break the month-long impasse, also held consultations with BJP leaders, including former Deputy Chief Minister Nirmal Singh, who said the party will take any step only after PDP elects its Legislature Party leader and notifies the Governor about it.

BJP asked the Governor for 10 days’ time to “resolve whatever is outstanding” with PDP.

Mehbooba asserted that “the Centre needs to create an environment to infuse confidence, and unless that happens, we cannot move forward.”

She said, “if a government is to be formed in the state, it (Centre) will have to take tangible measures to address the causes of alienation, trust and development deficit in Jammu and Kashmir and work towards finding a long-lasting solution to the problem plaguing the state for the past more than six decades.”

In a statement tonight, she said, “Today, it is not about the BJP and PDP. It is about what we tell the people about fulfilling Mufti Sahab s vision. We need tangible confidence building measures to be taken by the Central government to give the new government in J&K a fillip.”

Displaying her bitterness towards the Modi government, she said in a statement tonight, “Despite having taken a huge political risk of going against the public sentiment in Kashmir by aligning with BJP, Mufti Mohammad Sayeed was virtually made to run from the pillar to post by New Delhi to get event he constitutionally-guaranteed funds for the development of the state.”

She said, “Although PDP faced various challenges in the 10 months of its alliance with BJP, unfortunately, Mufti Sahab’s resolute decision was not reciprocated by the central government, the way he expected it to be.”

Earlier, emerging from the meeting with Vohra, Mehbooba insisted that there are “no differences” with BJP and that she was willing to take the coalition forward but Jammu and Kashmir needs a “good atmosphere, space and a fillip” if a new government is to be formed as it is different from others.