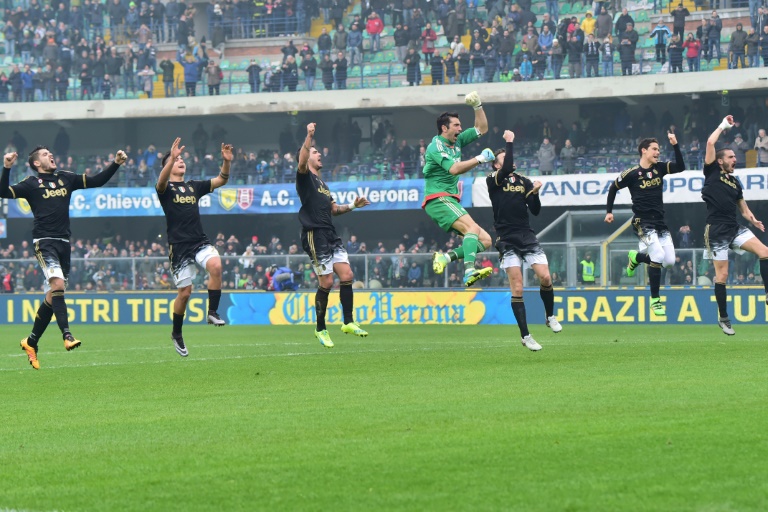 Juventus coach Massimiliano Allegri believes his impressive crop of young stars can achieve even more as they target a club record of 13 successive league wins with the visit of Genoa on Wednesday.

The four-time consecutive champions have put their miserable start to the season behind them and closed to within two points of leaders Napoli following a 4-0 rout of Chievo in Verona on Sunday.

After being ruled out of title contention at the start of the season, Allegri was only too happy to announce the Old Lady is back with a bang.

“Our 12 consecutive wins are a signal to the rest of the league that we are back in contention for the title,” Allegri said on Sunday.

But Allegri expects more from the likes of Paul Pogba, Alvaro Morata and Paulo Dybala — who are integral to the Turin giants’ chances of success this season.

And the 48-year-old Italian has brushed aside the importance of record-setting feats under his tenure.

“I think we can make improvements both collectively and individually,” said Allegri, highlighting one of several misses by Pogba before the Frenchman found the net in the 67th minute in Verona.

“Pogba’s final effort on goal is a case in point, when he struck the crossbar by hitting the ball too hard. Instead, he might have opted to place his shot to better effect.”

Allegri had kinder words for Morata, who hit a brace at Chievo to take his goals tally to the week to four after netting twice in a 3-0 rout of Inter Milan in the first leg of their Italian Cup semi-final.

“Morata had been scoring in training already over the past couple of weeks and when that happens, itâ€™s always likely that you’ll find the net in matches as well.”

And despite Dybala being voted the club’s MVP for the month of January, when he hit four of his 12 league goals so far, the Argentinian is constantly reminded that he is not the finished article.

“He has been doing well, but he still has plenty of room for improvement,” said Allegri.

Allegri’s stance is seen as an effort to spur the trio onto greater things, and recent evidence suggests they have been paying attention.

A 13th consecutive win on Wednesday would allow Allegri to overtake the club record of 12 set by former coach Antonio Conte in the 2013-2014 season.

But Allegri added: “To me, records don’t matter. What’s the point of winning 20 in a row if it doesn’t win you the title.”

Yet Juve’s chances of a record-equalling fifth straight scudetto were boosted by results elsewhere at the weekend.

Napoli travel to Lazio looking for their seventh win on the trot and with Argentinian striker Gonzalo Higuain in the hunt for a 23rd Serie A goal in as many games this term.

Higuain hit his 22nd league goal in a 5-1 thumping of Empoli on Sunday to equal the 22-goal tally that earned Mauro Icardi (Inter) and Luca Toni (Verona) a share of the top scorer’s ‘Capocannoniere’ trophy.

Napoli hammered Lazio 5-0 in only their fourth game under coach Maurizio Sarri, but the tracksuit-wearing, chain-smoking 57-year-old has called for caution.

“We’re playing well and we’re in good condition, but I’m not certain we can keep this up all the way till the end of the season.”

Mancini, meanwhile, will watch from the stands when Inter host Chievo looking for their first win in five games after he received a one-game ban and a fine of 5,000 euros for slandering the referee at Sunday’s San Siro clash.