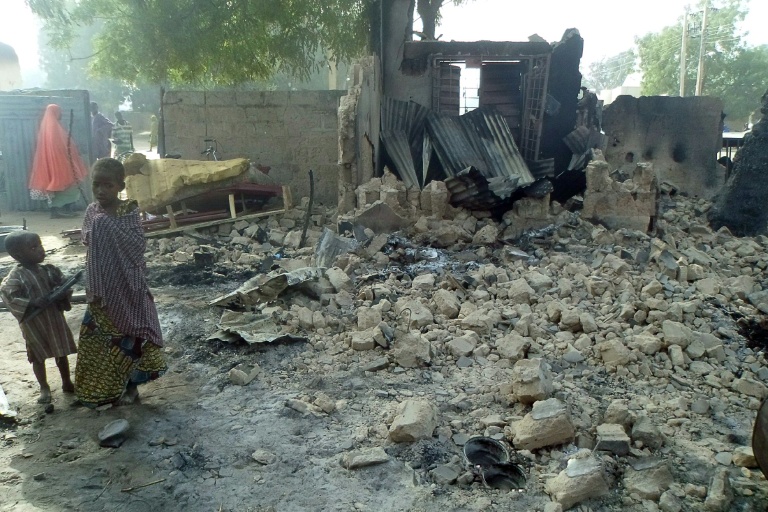 At least 85 people died this weekend when Boko Haram insurgents stormed and torched a village near the restive northeast Nigerian city of Maiduguri, a state commissioner said Monday.

It was the third deadly attack to hit the area in four days, after suicide bombers killed at least 24 people in two separate attacks on towns to the south.

Nigeria’s army said the gunmen attacked Dalori just outside Maiduguri late on Saturday after evening prayers, burning down the village and sending residents fleeing into the bush.

A first toll Sunday put the deaths at 50 but Borno State health commissioner Haruna Mshelia said 75 bodies were brought into hospitals and 10 others buried.

“A total of 65 bodies were deposited at the specialist hospital, 10 others are being deposited at UMTH (another hospital), while another 10 were buried yesterday evening at the Dalori community cemetery” Mshelia said.

The attack was swiftly condemned by the European Union on Sunday, which said it was committed to supporting regional African states in the fight against such extremist groups.

Eyewitness Bulama Malum said he saw about 20 bodies burnt beyond recognition and that 15 villagers were missing, as another source put the toll at 100 or more.

“Even as of last night the people that died were over 100. I am sure many could have died today,” vigilante Musa Adamu, a member of a civilian force assisting the military, told AFP.

Malam Masa Dalori, a community leader, told AFP that the assailants “came in Golf saloon cars and began to shoot sporadically. Many people ran to the bush including myself,” he said.

“When we came back in the morning the entire community had been razed,” he added.

Visiting the scene on Sunday, an AFP correspondent found the village largely reduced to piles of smoking ashes scattered with charred cooking pots and household items.

Small groups of women and children sat on the ground, gazing at the devastation as men wandered past burnt-out cars and ruined structures blackened by fire.

Army spokesman Colonel Mustapha Anka said the assailants had opened fire after arriving in the village on motorbikes and in two cars and had then begun torching homes.

Three female suicide bombers who initially tried to mingle with the villagers “were intercepted then blew themselves up,” he said.

The assailants also tried to penetrate a camp for people displaced by the Islamist Boko Haram insurgency situated just outside the village, but were repelled by troops, he said.

Following the Nigeria attack, the EU reiterated the bloc’s commitment to provide 50 million euros ($54 million) “to assist countries of the region to fight terrorism”.

“The EU remains committed to providing a comprehensive range of political, development and humanitarian support to Nigeria and the region in tackling this threat and in ensuring the sound development of the region,” it said.

Nigerian President Muhammadu Buhari, who in December alleged that Nigeria had largely won the fight against Boko Haram, urged local people to help the security forces in their bid to crush the group.

“I urge all citizens wherever they live to own the war against terror and to be part of the fight because it is the only way we can finish the remaining work that needs to be done to make our country safe again,” he said in a statement.

Boko Haram which seeks a hardline Islamic state in northern Nigeria has killed 17,000 people and forced more than 2.6 million others to flee their homes since 2009.