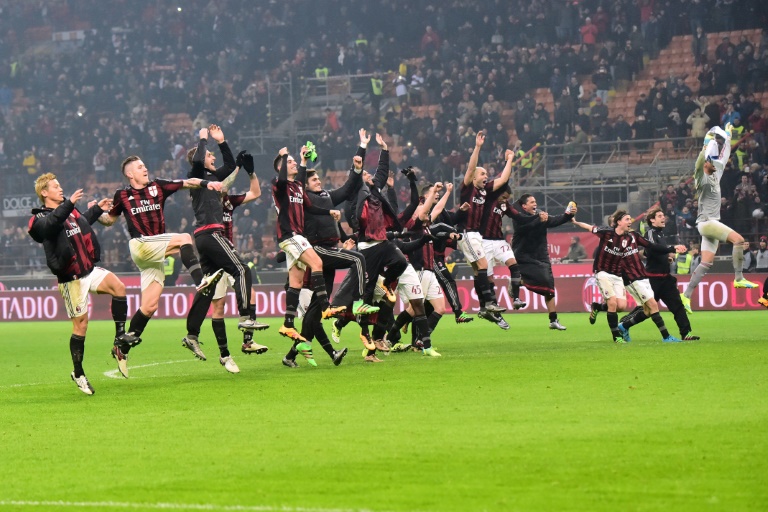 Carlos Bacca and M’Baye Niang hit second half goals as AC Milan ended their long wait to celebrate victory in the city derby with a crushing 3-0 win over Inter Milan on Sunday.

Title-chasing Inter had the chance to move up to third in Serie A to close the gap on leaders Napoli to six points.

But after a bright start, Roberto Mancini’s visitors took their foot off the gas to go into the dressing room 1-0 down after Alex’s 35th minute header.

Inter spurned the chance to pull level 20 minutes from the end when second-half substitute Mauro Icardi hit the post from the penalty spot.

It proved the turning point of the game and Milan, who suffered a 1-0 defeat to Inter earlier this season but last won the ‘Derby della Madonnina’ by three clear goals in 2011, doubled their lead on 73 minutes when Bacca kneed Niang’s delivery past Samir Handanovic from close range.

Four minutes later, the stadium erupted for a fourth time when Niang found the roof of the net at the second attempt to secure the points for Sinisa Mihajlovic’s men.

Seven-time European champions Milan are bidding to qualify for the Champions League next season after a two-year hiatus and although they remain 14 points behind leaders Napoli, they are only six points behind third-placed Fiorentina, who drew at Genoa earlier Sunday.

Inter have now failed to win their last three games meaning the Nerazzurri, who invested heavily in new players during the summer, are nine points off the pace.

With his strikers misfiring, Mancini beat Leicester City to sign Sampdoria striker Eder on Friday and the Brazil-born Italy international had a bright start in what must have been a baptism of fire.

Nearly 78,000 fans were in attendance and Eder showed promise early on but notably skewed a flying header wide from a Juan Jesus cross.

When Eder set up Marcelo Brozovic on the edge of the box, Milan ‘keeper Gianluigi Donnarumma was forced down low at his far post to save at the second attempt.

There were few clear chances in a nervous opening half, although Keisuke Honda was unlucky when he just failed to make good contact with a cross in to the six-yard box.

When the ball fell to the Japan midfielder moments later, he made no mistake, curling a perfect cross over the Inter defence for Alex to bundle a header into the net in the 35th minute.

Milan suffered a scare early after the restart when Donnarumma spliced an attempted clearance, prompting the ‘keeper to clash with Eder as the Italy international came in to challenge.

Penalty claims were waved away, but an increasingly angry Mancini was sent to the stands moments later for dissent.

Inefficient Inter striker Stevan Jovetic was replaced by Icardi just after the hour, but the game soon turned in Milan’s favour when Donnarumma got down low to stop the Argentine’s angled drive from inside the area.

As the ball bounced up, it came off the hand of Alex and a penalty was awarded. Icardi stepped up but saw his strike hit the right post.

The miss left Inter deflated and minutes later Bacca escaped his marker on the edge of the box to knee Niang’s inviting cross into the net.

Inter’s defence was even more absent four minutes later when Niang beat Handanovic at the second attempt after picking up his own rebound.