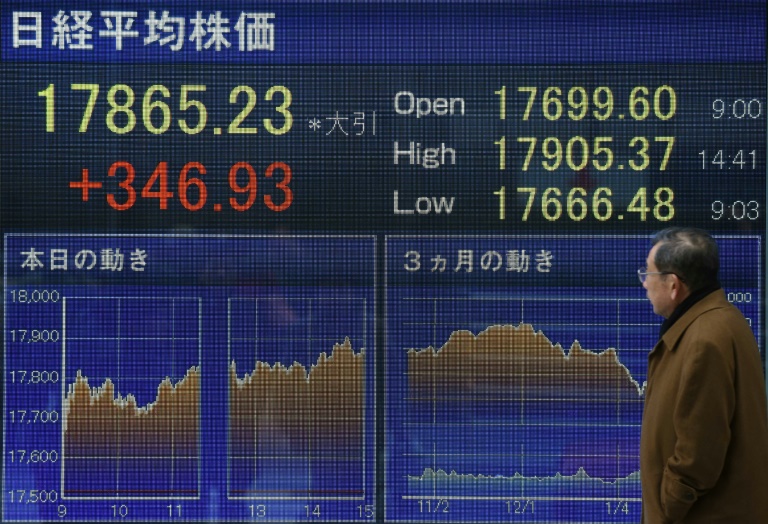 Frankfurt, London and Paris shed about half a percent in late morning deals, as investors eyed sliding share prices in Shanghai and Hong Kong, mixed data in the eurozone and lower oil prices.

Most Asian bourses sank after a key gauge of Chinese factory activity hit a more than three-year low, but Tokyo’s Nikkei index soared after Japan’s decision to slash some interest rates to negative.

Stock markets around the world had rebounded before the weekend, ending a volatile month with a bang after the Bank of Japan’s shock announcement.

“Ever-worsening manufacturing numbers from China along with a pullback from crude oil is reversing the bullish sentiment we saw last week,” said analyst Manoj Ladwa at broker TJM Parners.

In another example of weakness in China’s economy, the official Purchasing Managers Index showed its manufacturing sector shrank in January for the sixth straight month and was now at its weakest since August 2012.

The latest news follows a string of data indicating that the once-mighty growth rates in the Asian giant are well in the past.

“China’s numbers were always going to be the most closely watched overnight, with both the official and unofficial Caixin number showing that the Chinese manufacturing once again contracted,” said economist Jeremy Cook at traders World First.

“That deterioration is the sixth month in a row — the worst on record.”

Worries about the slowdown in the world’s second biggest economy — and its leaders’ handling of it — were among the key reasons for a rout across global markets in January that wiped trillions of dollars off valuations.

“Investors are still banking on Chinese policymakers to pull out all the stops and provide momentum for growth,” noted Rebecca O’Keeffe, head of investment at stockbroker Interactive Investor.

Traders cautioned that trading would remain muted in Asia this week ahead of the Chinese lunar New Year holiday.

However, Tokyo soared two percent, extending a 2.8-percent gain on Friday following the shock announcement from the BoJ that it would effectively start charging lenders to park their cash with it.

The move was intended to expand lending to people and businesses in order to kick-start the economy and fend off deflation.

Adding to the upward pressure in the Japanese market was a 12.4-percent surge in Sony, which on Friday posted a nine-month net profit of almost $2.0 billion thanks to huge demand for its PlayStation video games console and image sensors.