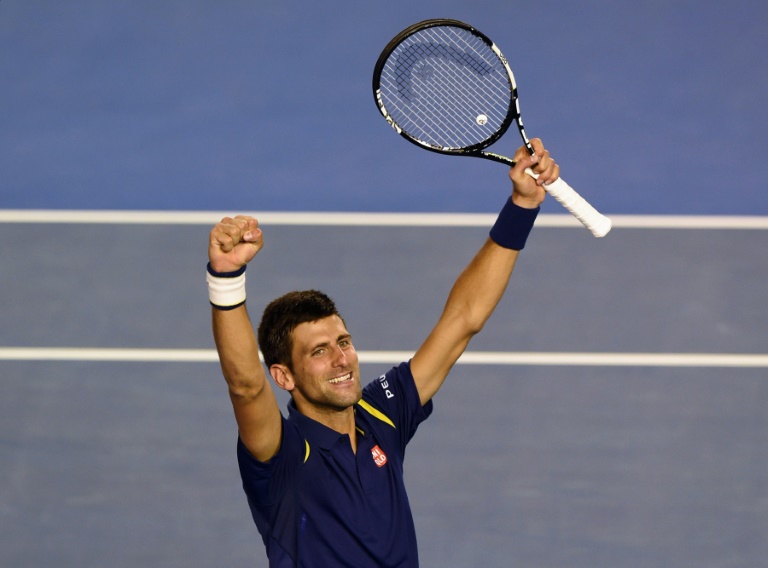 Another overpowering win kept him head and shoulders above his peers at the Australian Open, but Novak Djokovic said fears of a “big slap from karma” make him humble as he continues his quest for Grand Slam history.

The achievements keep coming for the supreme Serb after he smashed world number two Andy Murray 6-1, 7-5, 7-6 (7/3) in two hours, 53 minutes Sunday to lift his fourth trophy in five Grand Slams.

It moved the 28-year-old to 11 Grand Slam titles, joint fifth on the all-time list and, at his current rate, closing fast on Roger Federer’s all-time record of 17.

Not only has Djokovic become the first man in nearly 50 years to win six Australian titles, he has also established himself as a class apart from his main rivals: Murray, Federer and Rafael Nadal.

Murray never recovered from a first set which passed in a blur 6-1 — suffering the same fate as Nadal and Federer, who lost the first set by the same scoreline in their heavy defeats to Djokovic this year.

But Djokovic said he refuses to accept that he has separated himself from the top echelon of men’s tennis, previously dubbed the ‘Big Four’, although results may show otherwise.

“I don’t want to allow myself to be in that frame of mind,” he said, sitting next to the Norman Brookes Challenge Cup for the sixth time in the depths of Rod Laver Arena.

“Because if I do, the person becomes too arrogant and thinks that he’s a higher being or better than everybody else. You can get a big slap from karma very soon. I don’t want that.

“I try to still follow the same kind of lifestyle and routine, things that I’ve been doing all these years that have been helping me to get to where I am.”

He added: “I hope this kind of approach will help me to get to where I am. I don’t want to step away from it.”

Djokovic said he sets no “boundaries” as he contemplates a career which could yet outdo anything previously achieved on a tennis court.

Last year he put together one of the best seasons ever seen, winning three Grand Slam titles — a feat he also managed three years earlier in 2011.

This season, the first ever men’s ‘Golden Slam’, which is the four major titles plus Olympic gold, is on the table, a fact which will not have gone unnoticed by Djokovic.

But the main priority is completing the career Grand Slam by winning his first French Open title, the only big trophy to elude him last year when an inspired Stan Wawrinka left him in tears in the final.

He said: “I’ve heard actually one nice metaphor yesterday. It’s much easier for the wolf that is going uphill and running up the mountain… he was hungrier than the wolf standing on the hill.

“I can’t allow myself to relax and enjoy. I mean, I can. Of course I want to enjoy, and I will, but it’s not going to go more than few days.

“After that I’m already thinking about how can I continue on playing well throughout the rest of the season each tournament.”