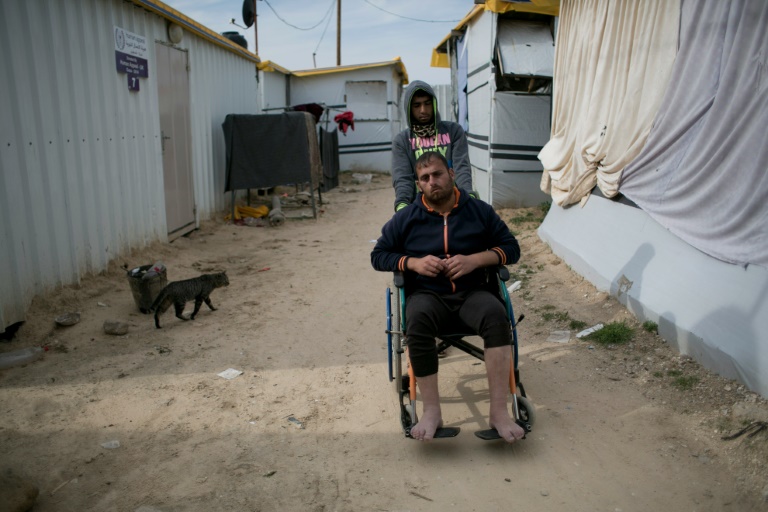 Azza al-Najjar struggles in vain to keep her two-year-old warm by wrapping him in blankets in her prefabricated metal home as a winter storm lashes the Gaza Strip.

“The cold increases the suffering of people here,” the 24-year-old mother says.

“My son has breathing problems and with the weather his condition has worsened.”

The family have been staying in the temporary home in the city of Khan Yunis in southern Gaza since theirs was destroyed in the 2014 war between Israel and Palestinian militants in the enclave.

But recent rains battering the besieged Strip have seen schools and roads closed, while families like Najjar’s have watched water and mud seep through the doorway into their homes.

She, her husband and two children — the youngest of whom is just six months old — live in a metal box just five metres (16 feet) by three metres.

It includes just one bedroom, a small corner for cooking and a bathroom.

“There is no electricity, water, food or gas,” she says. “We don’t even have firewood.”

Israel has for nearly a decade imposed a blockade on around 1.8 million people living in Gaza.

“Our life here is poverty, worries, blockade and homelessness.”

Her husband Samir, bundled up under blankets, watches helplessly as water gushes past their home.

“We live — but that’s only because we’re not dead,” says the 30-year-old, who became wheelchair-bound after being shot by Israeli forces in 2008.

The family survives on donations from charities that “are not enough”, he adds.

Their home is one of around 100 that an NGO from the United Arab Emirates built as a temporary measure after the war, but that are woefully inadequate for the winter rains.

Some families have stretched plastic sheeting over their roofs in a bid to prevent leaks.

With UN schools closed by the weather, older kids play idly in the rain. Three huddle around a small fire in a desperate bid to warm frozen bones.

Life in a mobile home is “cold like a morgue in winter and like a furnace in summer,” said Abdullah al-Najjar, 48, who also lives with six family members in one of the temporary shelters.

Azza al-Najjar stresses that speeding up the reconstruction of Gaza is the “most important thing” for her family.

The United Nations has completely rebuilt just one of the 20,000 homes rendered totally uninhabitable in the July-August 2014 war.

Over 120,000 more homes were at least partly damaged, according to the United Nations.

Tens of thousands of them have undergone repairs with its assistance, the UN says, but many families are still waiting for funds.

The 50-day conflict — which included an extensive Israeli bombing campaign — killed 2,200 Palestinians and 73 people on the Israeli side, and left much of Gaza in ruins.

An agreement between the Palestinian government, Israel and the United Nations allows in a small amount of building materials for reconstruction, but Israel’s blockade persists and the Egyptian border has remained largely closed.

Billions pledged by donors have been slow to arrive.

Meanwhile, the unemployment rate has reached 45 percent, according to the World Bank.

And with the bad weather, many have seen what little they have washed away.

Colonel Abdul Aziz Attar, a civil defence official, says crews aided 200 families in the southern Gaza Strip and rescued dozens from homes in Rafah, which has been partially flooded.

“We had to evacuate citizens in fishing boats,” he says.

The United Nations has provided plastic sheets and other aid to around 500 of the worst-hit families. It has also deployed emergency teams in various parts of the Gaza Strip to mitigate the flooding.

But Gaza’s housing minister Mufid al-Hasayneh told AFP it would take more than 130,000 apartments to house all those whose homes were destroyed in three Israeli offensives against the enclave since 2008.

This month Qatar provided more than 1,000 apartments to Gaza residents.

Still, it is not enough.

Azza al-Najjar says she and her neighbours have “heard a lot of promises, from the UN and others.”

“But we still don’t know when our houses will be rebuilt.”