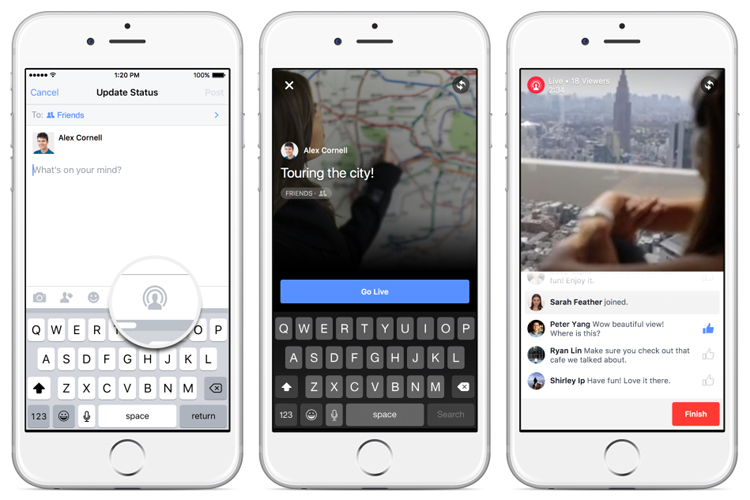 On the heels of posting stellar quarterly earnings results, Facebook expanded its offering for streaming live video at the leading social network.

A “Live” feature that Facebook began testing late last year became available to anyone in the US accessing the service using the California-based company’s iPhone application.

“It has been inspiring to see all the ways that people have used Live to connect with their friends and family,” Facebook product manager Vadim Lavrusik said in a blog post.

“We’re excited to expand the ability to share live video to everyone in the US via iPhone, and we plan to start rolling this out to the rest of the world over the coming weeks.”

The feature allows people to broadcast live to viewers at the social network, with streams digitally recorded and saved in a broadcaster Facebook timeline just like posted video, according to Lavrusik.

Live videos can be found in News Feed at Facebook accounts, and people can subscribe to friends or public figures to be notified about live broadcasts.

Public figures were invited last year to use Live, which Lavrusik described as being “like having a television studio in your pocket.”

Facebook said it is working on a version of Live for smartphones powered by Google-backed Android software.

The Facebook feature comes as a rival to live-video streaming mobile apps Meerkat and Periscope, which is owned by Twitter.

Facebook shares were up more than 16 per cent to $109.87 as the close of trading neared on Thursday.

The stock price surge came a day after the social network trounced Wall Street expectations with word that its quarterly profit more than doubled as its ranks swelled during the past year to a mammoth user base of nearly 1.6 billion.

The company reported a profit of $1.56 billion in the final three months of 2015 as compared with making $701 million in the same period a year earlier.

Revenue in the quarter that ended on December 31 rose to $5.84 billion from $3.85 billion the prior year.

The results showed Facebook’s growing power in online advertising, especially on mobile devices. Mobile accounted for about 80 percent of the network’s ad revenue in the quarter.