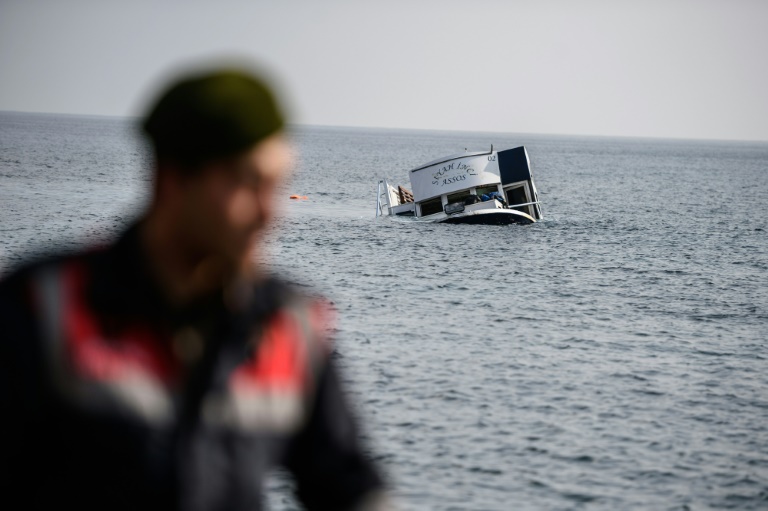 The Turkish coastguard on Saturday recovered the bodies of women and children washed up on a beach after yet another migrant boat sank while trying to reach Europe, leaving at least 37 dead.

In harrowing scenes reminiscent of the death of Aylan Kurdi, the Syrian toddler photographed lying dead on a Turkish beach in September, the body of a small child could be seen among those strewn over a beach near the town of Ayvacik in northwestern Canakkale province, an AFP photographer at the scene said.

An AFP picture showed the dead child dressed in dark trousers and a blue top, face covered with a small hat. In another image, a Turkish gendarme is seen lowering the body of an older child into a body bag.

Another young child was also found dead in the water, according to the AFP photographer.

A number of other children also drowned after the boat ferrying them and their families — some from Syria, others from Afghanistan and Myanmar — to the nearby Greek island of Lesbos sank just off the Turkish coast.

A Turkish official, contacted by AFP, said the Turkish coastguard recovered 37 bodies including children. The incident comes two days after 25 migrants, including 10 children, drowned off the Greek island of Samos.

In an earlier statement the Turkish coastguard said 75 people had been rescued.

The Turkish coastguard also said it could not give an exact number of migrants in the boat based on the testimony of the rescued migrants, adding that the rescue operation was continuing.

“We are sad. At least 20 friends are still missing,” a weeping woman who was among the survivors said earlier.

The capsized boat was visible around 50 metres (yards) from the shore, where divers from the coastguard were still searching for the missing. Military police in green berets placed bodies in bags to be taken to a morgue.

Life jackets and other refugees’ belongings were seen dotted across the beach.

The drownings continue a grim trend that accelerated last year when nearly 4,000 people died trying to reach Europe by sea, according to the International Organization for Migration (IOM).

The influx, which has been fuelled by Syria’s civil war, has continued throughout the winter.

During the first 28 days of 2016, a further 244 migrants died at sea, with at least a dozen more dying on land, the IOM said Friday.

Turkey, which is hosting at least 2.5 million refugees from Syria’s civil war, has become the main launchpad for migrants fleeing war, persecution and poverty to Europe.

The Turkish government struck a deal with the EU in November to halt the outflow of refugees, in return for 3 billion euros ($3.2 billion) in financial assistance, but the agreement has failed to check the migrant tide.

German Chancellor Angela Merkel said Friday that with 2,000 new asylum seekers entering the Balkans on their journey to northern Europe every day the EU “urgently” needed to implement its side of the agreement.

Italy has however questioned how much of the money should come from the EU budget, and how much control the bloc will have over how Ankara spends the funds.

Turkey’s minister for EU affairs Volkan Bozkir Saturday dismissed any problems with Italy about the release of the EU money and said the funds would be released in February.