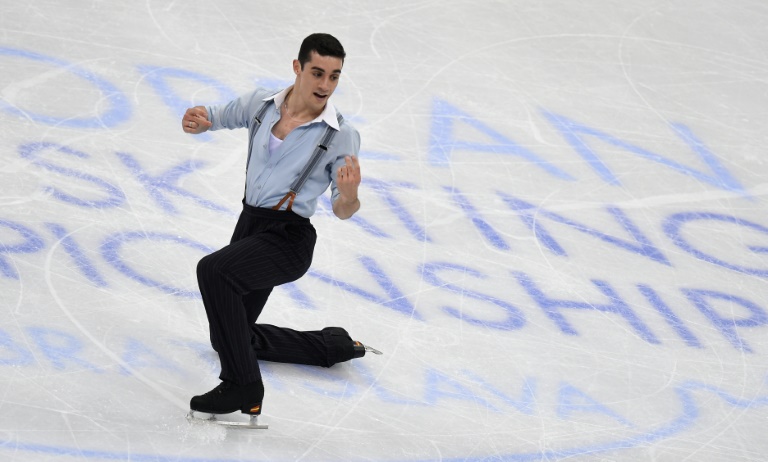 The 24-year-old Spaniard, who already had a clear lead after the short program, finished well clear of Israel’s Alexei Bychenko on 242.56 points while Russia’s Maxim Kovtun was third.

Performing a perfect quadruple toe loop, the Spaniard finished his routine to Frank Sinatra’s “Guys and Dolls” in tears, with his coach jumping for joy on the sidelines.

On Wednesday, Fernandez had for the first time crossed the 100-point barrier in the short dance, earning 102.54 points after an opening quad toe-triple toe combination and a quad Salchow and triple Axel.

Thursday saw him pull off three quads as he became the first man in 43 years to win the European title on four successive occasions.

Fernandez is also only the second skater to finish with a total of more than 300 points.

“It doesnâ€™t matter how many times you win something, if it the first time or second time, it is always special,” said the Spaniard.

“It is so important to keep making history in my home and in figure skating. To be among those great figure skaters who have won this title four times in a row is such a special thing.

“I am so happy for today and so happy to get four titles in a row but I donâ€™t want this to finish today I want it to continue.”

Earlier Thursday, world and European champions Gabriella Papadakis and Guillaume Cizeron of France trailed in second after the short dance.

Italy’s Anna Capellini and Luca Lanotte, the world and European champions in 2014, waltzed their way into the lead with 72.31 points, with the French 1.57 points behind the leaders going into Saturday’s free dance final.

Papadakis and Cizeron are competing in their first international competition this season after 20-year-old Papadakis suffered concussion in a training fall last August.

“We were ready and we’re happy with our performance even if we had hoped for better scores,” said 21-year-old Cizeron.

“Even if we started our season late we managed to catch up.

“In general we’re not often first after the ‘short’ (programme). We feel comfortable with this place and we’ll do our best (in the free programme).”

The championships continue Friday with the pairs short program and the women’s free skate.