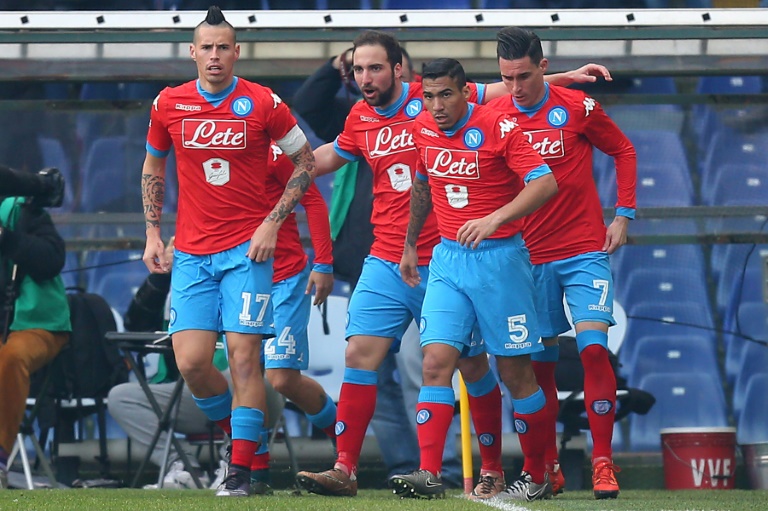 The importance of record-setting striker Gonzalo Higuain has been brought home to Serie A leaders Napoli but most eyes on Sunday will be on Inter Milan’s bid for a crucial derby win at AC Milan.

Napoli tightened their lead at the top of Italy’s top flight last week to remain two points ahead of champions Juventus before welcoming Empoli to the San Paolo on Sunday.

But the Azzurri, who won the last of their two league titles in 1990 when Diego Maradona was still in his heyday, suffered a scare when Higuain narrowly avoided a serious injury knock on Thursday.

Higuain, who has hit 21 league goals in as many games this season, hobbled off the pitch with a sore ankle during a friendly match with San Vito Positano.

Although he is expected to be fit, all eyes were on coach Maurizio Sarri at Napoli’s Castel Volturno training ground on Thursday.

Sarri was slapped with a two-game Cup ban for a recent homophobic rant at Inter Milan coach Roberto Mancini but, to show he meant no ill feeling towards homosexuals, he accepted to play a friendly game against the local, fifth division side, whose president Alessandro Cecchi Paone is openly gay.

The gesture almost backfired, but served to underline Napoli’s reliance on their main source of goals this season.

Napoli president Aurelio De Laurentiis, one of 64 people targeted by Naples prosecutors for alleged false accounting and tax evasion in midweek, said: “I always wanted us to play a midweek match against a lower league team, now we have this friendly thanks to Cecchi Paone and Sarri.

“The unknown factor is what has happened to Higuain.”

As Higuain looks to maintain his impressive goals quest, compatriot Mauro Icardi is among several Inter Milan strikers under pressure to perform as the club’s title ambitions hang increasingly in the balance.

Inter have scored only four times in their past five league outings, losing two, drawing two and winning only once to slip to fourth in the table at six points behind Napoli.

“I’m 50 years old, and even I would have scored from some of the chances we had,” Mancini lashed out last week after 10-man Carpi hit a late leveller to snatch a 1-1 draw at the San Siro.

If Mancini was hoping to embarrass his men into action, he may now be looking for a different approach after another setback in midweek.

A 3-0 defeat to Juventus blew a hole in Inter’s Italian Cup hopes in the first leg of their semi-final, when Icardi was left on the bench in favour of Stevan Jovetic.

Inter will look to appease fans with a second consecutive derby win on Sunday against a Milan side that, going on their own Cup semi-final display, has little to shout about.

But Mihajlovic was less than impressed, berating his players for their “failure to put several early chances away”. He declared there will be no place for Balotelli in his starting XI on Sunday.

“Mario won’t be playing the derby because he’s not match fit. We’ve got four days to prepare for this game and the best team possible will be on the team sheet,” said the Serbian, a former midfielder with Inter.

Defeat for Inter would be a significant blow to their title hopes, and leave Napoli and Juventus with one less rival to worry about.

Juventus travel to Chievo with a four-point lead on Fiorentina and Inter, and are looking for their 12th consecutive league win a week after Paulo Dybala’s late winner secured a 1-0 home win over Roma.