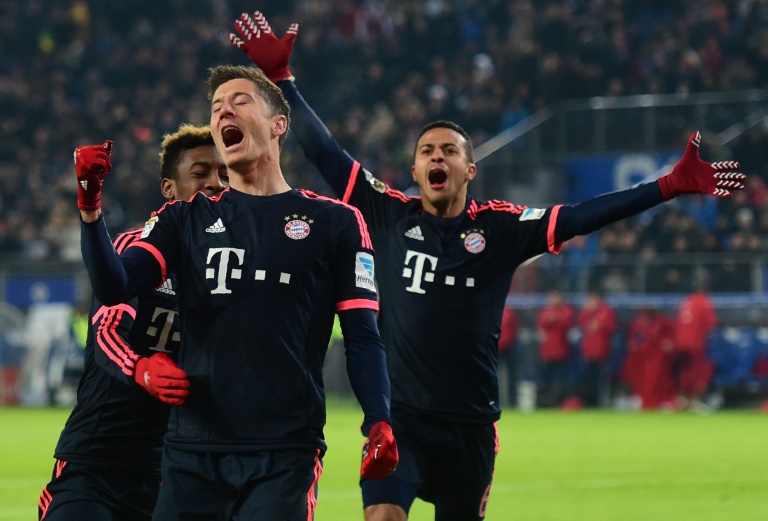 Bayern Munich host strugglers Hoffenheim for Sunday’s Bundesliga match in rude health atop the table, but with cracks apparently appearing behind the scenes.

‘Kicker’ has reported a member of Bayern’s squad has broken ranks by admitting the atmosphere is “not good” in the squad as coach Pep Guardiola tightens control.

The mole has told the German magazine that the squad is unhappy after being sent an email, which says they must now officially register their movements on days off to avoid any meaningless travel.

The Spaniard, who will quit in June, is also said to have told his players he expects more professionalism from them and has even discussed introducing a curfew.

Guardiola is said to be increasing the pressure as he strives to sign off his three years in Munich with the treble of Champions League, Bundesliga and German Cup titles.

Bayern are suffering from what forward Thomas Mueller has described as ‘disease of the boot’ after Jerome Boateng became the 14th player to be injured this season.

The Germany defender is out indefinitely with a groin injury, leaving Guardiola with Javi Martinez and Holger Badstuber as his only fit centre-backs.

Second-from-bottom Hoffenheim are desperate for points under caretaker coach Huub Stevens and have managed just six from a possible 15 in their last five games.

The Sinsheim-based club are four points adrift of the first non-relegation spot in the Bundesliga table and have never beaten Bayern in any of their 15 matches with 11 wins for the Bavarians and four draws.

Nevertheless, the weekend promises to see Bayern’s Robert Lewandowski and Borussia Dortmund’s Pierre-Emerick Aubameyang resume their battle to be the league’s top scorer.

Lewandowski scored twice in Bayern’s 2-1 win at Hamburg last Friday to move within a goal of Aubameyang’s 18 goals in 18 league games.

Second-placed Dortmund host mid-table Ingolstadt with Aubameyang looking to get back to goal-scoring ways after a series of misses last time out.

With 17 goals and 13 assists between them, the trio have conspired to be involved in an impressive 60 per cent of Dortmund’s 50 league goals so far this term.

Each player capped impressive individual displays in Gladbach with a goal and an assist while Aubameyang had a rare off night.

Borussia have won all seven games in which the 25-year-old Reus has found the net in this seasonâ€™s Bundesliga.

Mkhitaryan has been a revelation on the right wing this season, weighing in with 12 assists and seven league goals for a haul of 16 goals and 20 assists in all competitions.

Germany international Gundogan is back to his best after a chronic spinal problem restricted him to just one game in the 2013/14 season.

But visitors Ingolstadt have said they will not be intimated by the atmosphere at Dortmund’s 80,000-capacity Signal Iduna Park stadium.

So far, 12 of their 23 points have come on the road after earning draws at both Schalke and Gladbach, while they lost only 2-0 at Bayern in December.

“Anyone who knows us, and has seen our away statistics, knows the higher the pressure, the cooler and more successful we are,” insisted Ingolstadt coach Ralph Hasenhuettl.

Third-placed Hertha Berlin need points to close the eight-point gap behind Dortmund at Werder on Saturday after being held to a goalless draw by Augsburg last weekend.

Bremen are 16th, amidst the relegation places, but were buoyed by a 3-1 win at Schalke last Sunday when captain Clemens Fritz, 35, rolled back the years with a goal and two assists.

Fixtures (all times 1430 GMT unless stated)