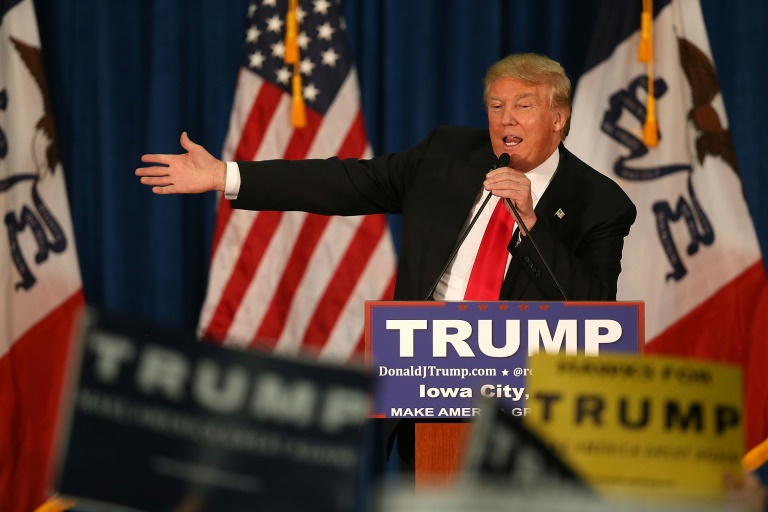 With just five days before the first vote in the US presidential nominations process in Iowa, Republican frontrunner Donald Trump is dominating the airwaves. His approval rating has never been higher.

And the celebrity billionaire has left the Republican Party dumbfounded with his announcement that he will not participate in Thursday’s nationally televised debate in Des Moines hosted by Fox News, with which the tycoon is feuding.

All eyes are on the heartland state, where the 12 Republican candidates and three Democratic hopefuls including Hillary Clinton are vying for bragging rights and the lead in the primary race heading to subsequent votes in New Hampshire, South Carolina and Nevada.

But as they all grapple for air time, newspaper column inches or social media mentions, it is the Trump juggernaut that continues to hog the spotlight with his political antics.

He dropped a bombshell late Tuesday, saying he would skip the Fox News debate.

“Mr. Trump knows a bad deal when he sees one,” his campaign team said in a statement after Fox took the unprecedented step of mocking Trump for asking his Twitter followers to weigh in on whether or not he should attend the debate.

Fox and its chief executive Roger Ailes “think they can toy with him, but Mr. Trump doesn’t play games,” the campaign said.

Fox shot back that it would not give in to “terrorizations” from the Trump team, after it accused Trump’s campaign manager of threatening Fox News host and debate moderator Megyn Kelly.

The Republican National Committee appeared eager to distance itself from the Trump-Fox war.

But “at the end of the day, each campaign has to make up their own mind as to what’s in their best interest, and so we respect that decision.”

Trump has a genuine battle on his hands in Iowa with ultra-conservative Senator Ted Cruz, his nearest GOP rival who trails by about five percentage points in the RealClearPolitics average of recent Iowa polls.

Nationally, it is a different story. A new CNN/ORC poll of Republican voters has Trump doubling up on Cruz, 41 percent to 19 percent, with more than two-thirds of Republicans saying they believe the billionaire will seize the party’s presidential nomination.

Cruz offered a remarkably candid assessment of Trump’s surge, warning evangelical pastors in Iowa Monday that if Trump manages to win Iowa and then New Hampshire, he could prove “unstoppable.”

It will be Cruz, however, who takes center stage Thursday with six other Republicans in Des Moines without Trump, who will leave a glaring hole.

Cruz hit out at his rival, saying on the Mark Levin radio show that “Donald Trump is now afraid to appear on the debate stage.”

He also challenged Trump to a one-on-one debate.

“I’m glad he’s not coming, from my perspective. It’s more time for the rest of us on the stage,” Christie told Boston Herald Radio.

He also said Trump’s thin-skinned reaction to criticism only “makes people call into question his judgment.”

Rubio sought to stay above the fray, stressing that “these kinds of theatrics by Ted Cruz and Donald Trump are an entertaining sideshow, but they have nothing to do with defeating Hillary Clinton.”

On the Democratic side, Senator Bernie Sanders is running neck and neck with the former secretary of state.

The independent senator from Vermont was in the spotlight Wednesday when he spent an hour in the Oval Office with President Barack Obama discussing foreign and domestic policy, as well as the campaign.

Sanders said the Iowa result will come down to turnout.

“If there is a large turnout, I think we win,” he told reporters. “If not, I think we’re going to be struggling.”