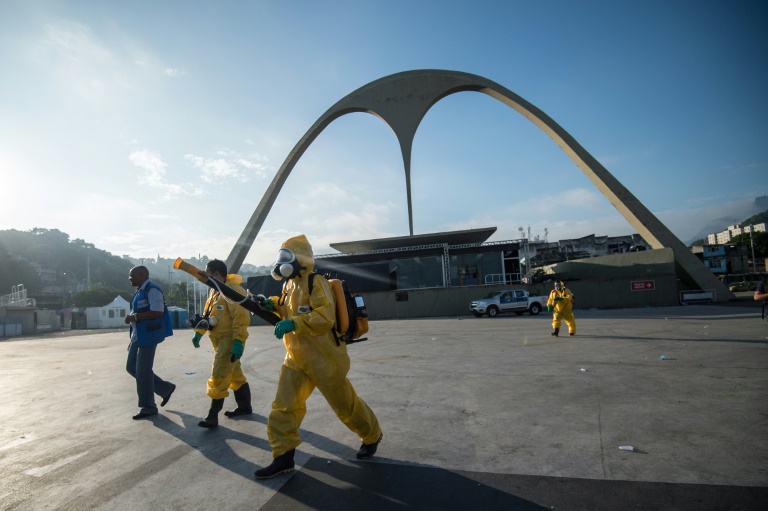 Rio de Janeiro sent fumigators Tuesday into the city’s carnival stadium, which will also be used for Olympic archery in August, to combat an outbreak of the mosquito-borne Zika virus.

The sight of men in protective overalls and goggles spraying the famous Sambadrome facility was a grim confirmation of just how worried Brazil is becoming that the virus scare will tarnish both the carnival and upcoming Summer Olympics.

The Sambadrome will host Rio’s elaborate annual parades on February 7 and 8, and also the archery contest during the Games.

“The concern is very great in all of Rio because it’s a city for mega events. During the carnival there’ll be crowds of people from different parts of the world and Brazil, which will help the virus get in,” said Marcos Vinicius Ferreira, spokesman for Rio’s health department.

“The main thing is to get rid of mosquito breeding sites,” he said.

Zika is linked to serious birth defects, including microcephaly, in which babies born to women infected during pregnancy have abnormally small heads.

A surge in incidents across Latin America, notably in Brazil, has prompted the United States and other governments to warn pregnant women against traveling to the region — an alarming prospect for Brazil as it gears up to stage the Olympics.

Unlike in some other international health scares, the Zika virus is not spread person to person. And for most people who get infected, the flu-like symptoms will clear up in about a week.

Brazil is mobilizing more than 200,000 troops to go “house to house” in the battle against Zika-carrying mosquitoes, blamed for causing horrific birth defects in a major regional health scare, a report said Monday.

Soldiers will fan out to homes across Brazil distributing leaflets and dispensing advice, Health Minister Marcelo Castro was quoted as saying by the newspaper O Globo, signaling a major ramping up of efforts against the Zika virus.

Castro said that the government, under growing pressure to deal with the crisis, will also hand out repellent to at least 400,000 pregnant women on social welfare.