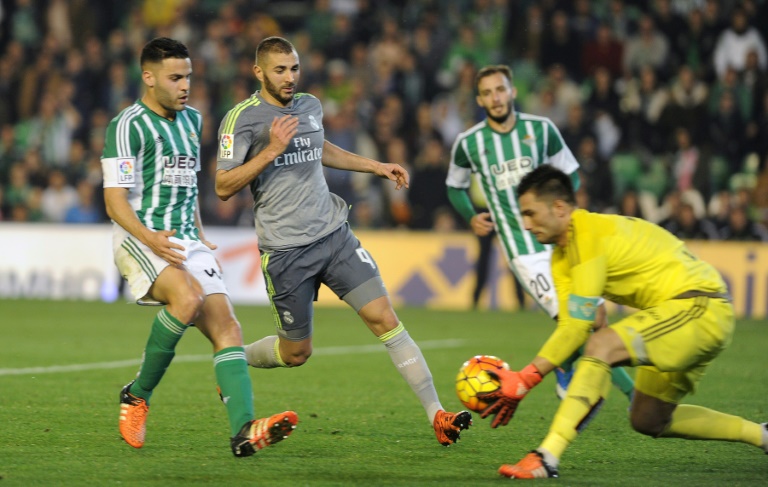 Atletico Madrid also spurned the chance to move back on top as they failed to break down 10-man Sevilla in a 0-0 draw at the Vicente Calderon.

A point means Atletico and Barcelona are now level on points at the top of the table ahead of their meeting at the Camp Nou next weekend, although Barca also have a game in hand on both sides from the capital.

Betis hadn’t scored in their previous seven games as part of a 10-game winless streak, but needed just seven minutes to make the breakthrough in spectacular fashion.

Keylor Navas made a fine save to block Ruben Castro’s first effort, but the ball eventually fell to Cejudo on the edge of the area, who unleashed a volley into the top corner Zidane himself would have been proud of in his playing days.

Betis’ intense start unsettled a Madrid side that had struck 10 goals in Zidane’s first two games in charge, but the visitors slowly began to take control and Ronaldo missed a huge chance to level when he scuffed his shot wide with just Antonio Adan to beat.

Pepe also sent a header wide when unmarked from point blank range and Benzema wrongly had a penalty appeal waived away when he was stood on by Petros.

However, Zidane’s men did get a break for the equaliser 19 minutes from time when James Rodriguez appeared to be offside as he latched onto Toni Kroos’s through ball and squared for Benzema to tap home his 21st goal in 20 games this season.

Antonio Adan then produced two stunning saves to prevent Rodriguez and Benzema in as many minutes as Madrid piled on the pressure in search of a winner.

Yet, it was Betis who had a huge chance to win the game in stoppage time when Ruben Castro fired inches wide.

At the Calderon, Antoine Griezmann had Atletico’s best effort when he headed against the post early in the second-half, but the hosts failed to take advantage after Vitolo was shown a second yellow card just after the hour mark.

Even after the red card the hosts struggled to open up the Sevilla defence, but a well-worked free-kick freed Yannick Ferreira Carrasco inside the area and his fierce shot was brilliantly saved by Sergio Rico.

“When you don’t score it is normal that is what people talk about, but we had plenty of chances today,” said Atletico boss Diego Simeone.

“We hit the post, their keeper made a great save and the only way to score in football is by creating chances.

“The team worked hard and there were positives from the game in how we kept going. We tried in every way to break down the Sevilla defence.”

Valencia remain a mammoth 16 points off fourth place in 11th as their run without a league win since November 7 continued at Deportivo.

Lucas Perez coolly slotted home his 13th goal of the season to give the home side a deserved half-time lead.

However, Neville’s men again came from behind to salvage a point for the fifth time in his seven league games in charge when Negredo powered home Dani Parejo’s cross with virtually the last action of the game.

Athletic Bilbao gunned down high-flying Eibar 5-2 in a Basque derby at San Mames.