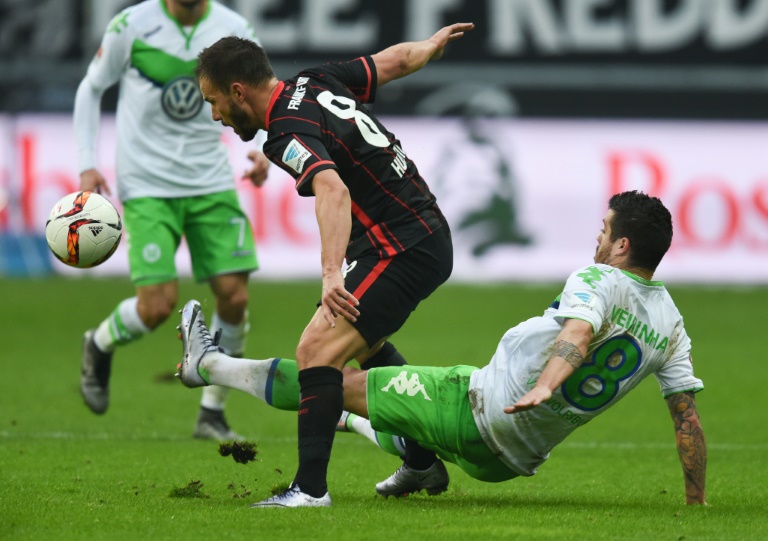 Wolfsburg, who face Ghent in the last 16 of the Champions League, are seventh, outside next season’s European places, after the Frankfurt defeat.

Schalke are sixth after losing 3-1 at home to relegation-threatened Werder Bremen.

After Wolfsburg’s Germany winger Andre Schuerrle hit a late equaliser in Frankfurt, Wolves were heading for a 2-2 draw before Meier struck a late dramatic winner.

He equalised on 66 minutes, then put his side ahead on 73 minutes before Schuerrle levelled six minutes later.

But Meier produced his third goal, from just his third shot, three minutes into added time as Wolfsburg were punished for woeful defending.

The result left Wolfsburg seventh, with Eintracht 14th, and means Wolves are winless in their three games since beating Manchester United in their final Champions League group game.

Another German league shock then followed in Gelsenkirchen when Schalke crashed despite taking a fourth-minute lead through Cameroon defender Joel Matip from a corner.

Bremen remain in the bottom three despite picking up only their fifth win of the season with goals by captain Clemens Fritz, former Bayern and Chelsea striker Claudio Pizarro and Nigeria’s Anthony Ujah.

Veterans ruled at the Veltins Arena as Fritz, 35, equalised, then turned provider by setting up the 37-year-old Pizarro for his 178th German league goal in his 397th Bundesliga match on 54 minutes.

And Fritz again provided the final pass for Ujah to hit Bremen’s third, and his eighth of the season, just a minute from time.

Goals by Dortmund’s Marco Reus, Henrikh Mkhitaryan and Ilkay Gundogan, with a consolation from Gladbach’s Raffael, sealed the win.

It left Dortmund both eight points behind Bayern and eight points ahead of third-placed Hertha Berlin, who were held to a goalless draw at home to Augsburg in the capital.

It was only Gladbach’s second league defeat since Andre Schubert took charge last September with the team bottom of the table. They stay fourth.

On Friday, Bayern kicked-off the second half of the season with a 2-1 win at Hamburg thanks to Robert Lewandowski’s two goals.

At the other end of the table on Saturday, veteran Portugal striker Hugo Almeida marked his debut for relegation-threatened Hanover 96 with a goal.

But he was unable to prevent their 2-1 defeat at home to Darmstadt as Sandro Wagner scored both of the visitors’ goals.

Stuttgart left the relegation places with a 3-1 win at Cologne as Jurgen Kramny picked up his second straight win having been given the head coach role full-time.

Bayer Leverkusen stay fifth after their 1-1 draw at Hoffenheim as Jiloan Hamad’s goal for the hosts was cancelled out by Leverkusen captain Omer Toprak’s late strike.

Ingolstadt, who are in their first season in Germany’s top flight, earned a 1-0 win at home to Mainz through a Moritz Hartmann penalty to go tenth.