Home World Washington and other US cities dig, and dig, after monster blizzard 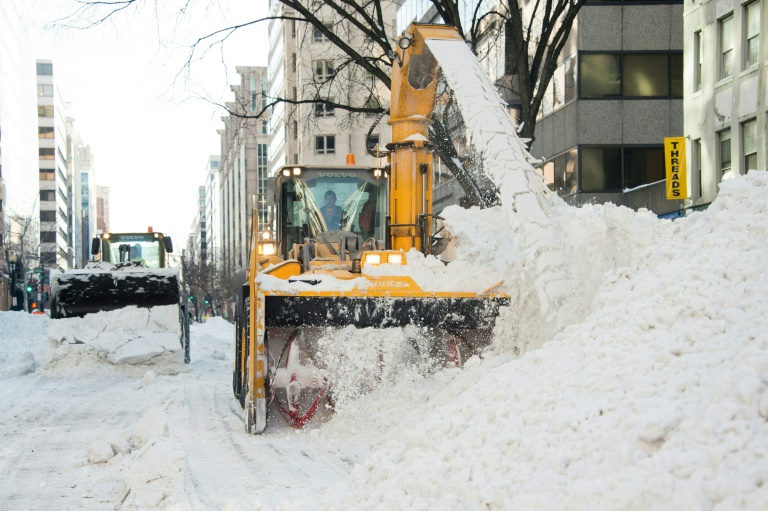 The icy streets of the US capital remained largely deserted Monday on the first work day after a mammoth blizzard smothered the East Coast, with schools and the federal government closed as people dug their cars and doorways out from mountains of snow.

The storm was blamed for at least 30 deaths as it slammed a dozen states from Friday into early Sunday, many of them people who suffered heart attacks while shoveling, or killed on icy roads, though several died of carbon monoxide poisoning trying to keep warm in their cars or homes.

An estimated 85 million residents were told to stay indoors for their own safety, and hundreds of thousands were left without power.

Washington’s subway and bus network, closed all weekend, resumed service but on a very limited basis as crews worked to clear the streets. For a day, trains ran for free.

Under a sunny sky, the normally bustling avenues around the White House and the K St. corridor that is home to the city’s powerful lobbyists were all but empty.

The few people out and about trudged through slush and ice and picked their way through sometimes chest-high drifts of snow piled up by plow trucks. Most restaurants, office buildings and stores remained closed.

“From my estimation we got more snow than I have ever seen in Washington, D.C.,” Mayor Muriel Bowser told CNN. “We are working hard to dig out all of our residential streets.”

Limited flight operations resumed Monday from Washington’s Reagan National and Dulles International airports on Monday, a day after officials battled in New York to get some aircraft off the ground.

More than 22 inches (56 centimeters) of snow paralyzed Washington, while the 26.8 inches (68 centimeters) that fell in New York’s Central Park was the second-highest accumulation since records began in 1869.

“We now know this blizzard came within .1 inch of being the biggest snowfall in history” in New York City, Mayor Bill de Blasio said Monday morning. At one point, 2,500 snow plows were operating.

“We were getting as much as three inches in an hour. So this really was the big one,” he added.

Near-record-breaking snowfall blanketed other cities up and down the East Coast, with Philadelphia and Baltimore also on the receiving end of some of the worst that Mother Nature could fling at them.

In Passaic, New Jersey, a 23-year-old mother and her one-year-old son died of carbon monoxide poisoning during the storm, while three-year-old daughter was hospitalized in critical condition.

“The father was shoveling their car out and the wife and kids wanted to stay inside the car to keep warm,” Detective Andrew White told AFP. “The car’s exhaust pipe was covered and blocked with snowing causing carbon monoxide to enter the car.”

An elderly couple in Greenville, South Carolina, also died of suspected carbon monoxide poisoning after setting up a generator in their garage to keep warm when their power went out, the Greenville County coroner Park Evans told AFP.

Hundreds of thousands were left without power at the height of the storm, including nearly 150,000 outages in North Carolina alone, emergency officials said.

Beyond the Big Apple and the US capital, New Jersey, Pennsylvania, Maryland and Virginia were the hardest-hit areas. A few locations surpassed one-day and two-day snow records, said the National Weather Service.

As the storm ended and temperatures rose, New York emerged from total shutdown and lifted a sweeping travel ban on Sunday.

Thousands of people flocked to parks, tobogganing, organizing snowball fights and strapping on cross-country skis, as children delighted in a winter wonderland under glorious sunshine.

Jessica Edwards, a filmmaker from Canada, joined in the fun, pulling four-year-old daughter Hazel down a hill on a sled in a New York park.

“Oh my God, she’s so excited — we left the house this morning and we packed a bunch of stuff to make a snowman,” she told AFP.

Schools in New York were open Monday and the mass transit system was up and running for the most part.

But in Washington residents were bracing for the disruption to drag on for days, with the House of Representatives opting to remain out of session for the coming week due to the severity of the winter storm — with no votes set until February 1.